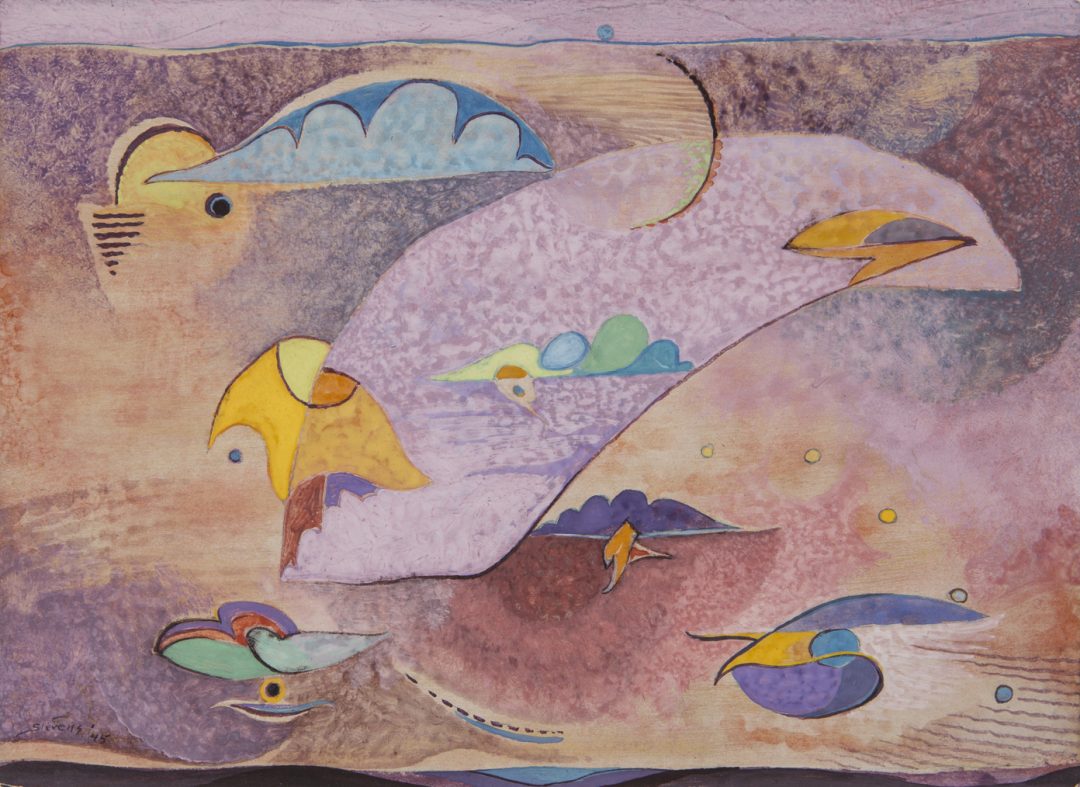 A native of Indiana who taught at Newcomb College in New Orleans during the 1920s through the 1940s, Will Henry Stevens’s (1881–1949) work was exhibited at the college in 1944, where it drew praise from Josef Albers. In a letter to Stevens, Albers wrote: “I am impressed with your sensitive musicality for color and your ability to handle a multitude of forms and to combine them to an organic whole. In my painting class, we have discussed and analyzed these qualities, not too often respected in modern painting, and I am sure that our students have learned something from you and that many artists could learn from you about color and composition.”¹

Stevens often traveled in Western North Carolina and painted many landscapes depicting its scenery, but he also created abstract work that was influenced by Kandinsky, Klee, and the Transcendentalist philosophies of Ralph Waldo Emerson (1803–1882) and Henry David Thoreau (1817–1862). His untitled gouache of 1945 suspends small biomorphic shapes over pastel-colored washes, while multiple horizon lines are suggested at the bottom, middle, and top. The work is an otherworldly vision reminiscent of Kandinsky’s drawings and paintings, which utilized abstract forms and color symbolism to express spiritual truths. Stevens noted: “I do not draw a line between objective and non-objective…. What I have liked in nonobjective is, for me, the new experience in design I am permitted when I do not have to tie everything to a base, as in objective painting. Anyway, I am doing both and will continue to, so long as either seems vital to me.”²

The abstract style of this painting represents a thoroughly avant-garde art movement that began during the 1940s when the art world moved from Paris to New York as the result of the devastation inflicted on Europe by WWII. The style expresses the artist’s state of mind without referring to concrete objects. I see the grouping of shapes, varying from straight lines and sharp angles to rounded forms, and colors ranging from cool blues and greys to warm ochres and ambers. The effect is one of feeling in harmony with this well-balanced composition. It seems to me that Stevens has reduced the overwhelming appearances of the modern world to their elemental properties while preserving a subjective emotional expression of an ideal, rather than painting recognizable objects.

What is the function of art in our new century of short attention spans and rapid changes, where the only thing permanent is change? Previously, during medieval times for example, the artist when asked what his purpose was in the world, would have replied that it was to glorify God. No need to put his signature to his creations. Since then, many things, including at times the artist, have seemingly been moved to the periphery of a preprocessed world, all emotions reduced to electronic impulses. What is the artist’s place? Is the artist a salesman peddling art as a commodity on the market in the absence of a patron? Or is the artist, in Picasso’s words, “a public entertainer who has understood his time?” In this computerized world of shrinking identity, how does the human spirit assert itself? The artist is obsessed with getting a “self” out, getting it on canvas; it is all self.

I see the forms in this painting of relational structures as an impulse of the unconscious, if only for a moment to get the mind going—probing, finding, completing—to subvert the established order that sometimes seems to swallow up our sense of what it means to have a self.