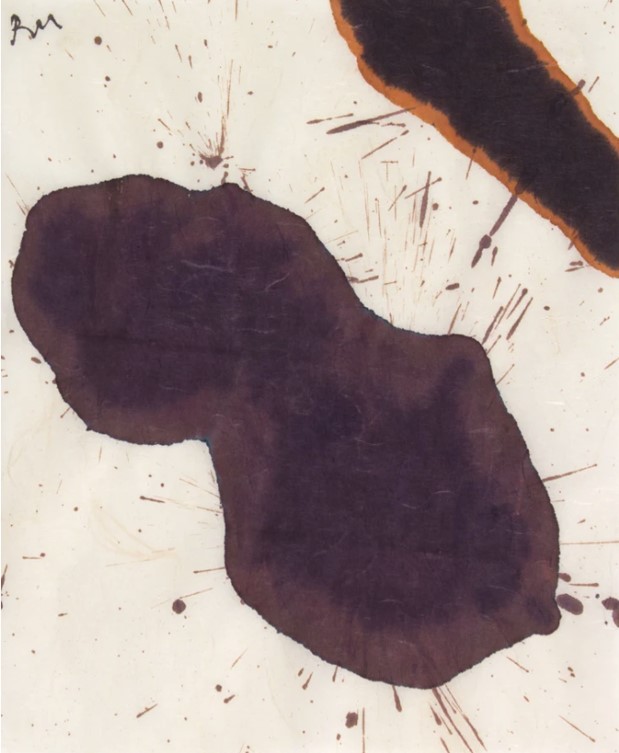 These two works on paper, part of a body of work known as Lyric Suite, are from a set of over 600 unique works produced in this style by Robert Motherwell in the year 1965. These abstractions were produced in response to comments from friend and poet Frank O’Hara regarding Motherwell’s interest in automatism. Motherwell then in turn made the Lyric Suite works in succession with great rapidity in ongoing sessions, each smaller drip painting produced from a set of hundreds of sheets of rice paper. The artist stated: “Unable to control spread of ink, which varied according to heat and humidity—never knew what one would end as, until it ‘set’; each picture would change before my eyes after I had finished working, sometimes for hours—as the ink spread, like a spot of oil.” Motherwell created this series while listening to Lyric Suite, a score which was composed by Alban Berg in 1925, and left each work unaltered after his initial drips of ink pigment.

The two untitled works on paper from the Lyric Suite joined our Collection in 2021 and encapsulate the spirit of this artist’s exploratory and visually impactful effort. Among the most important mid-century American artists, Motherwell was a leader of the Abstract Expressionist movement and taught at Black Mountain College in 1945 and 1951.

These works are currently on view in Intersections in American Art.