X
Home > Blog > Within You Without You by Matt Jones 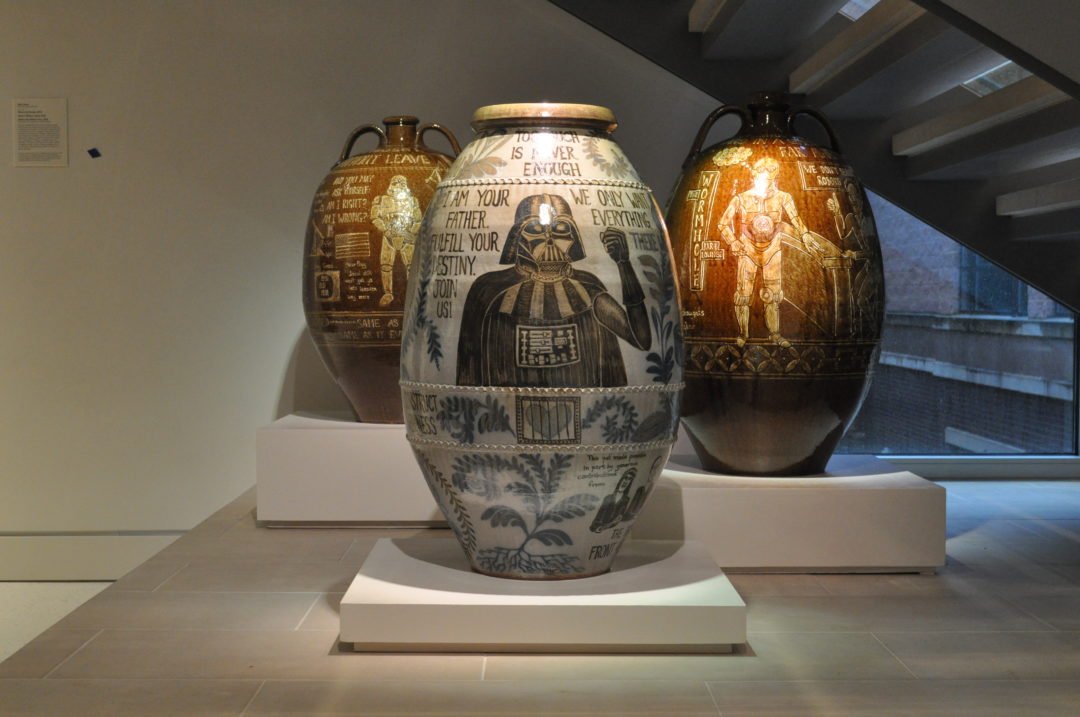 In a galaxy far far away… or perhaps not. Star Wars has become intertwined with our day-to-day lives, seeping its way into our popular culture. If you go up to any person on the street and ask, “do you know Star Wars?” They will most likely answer with a yes.

Within You Without You by Matt Jones (born 1971, Charleston, SC) provides striking imagery and hidden commentaries on politics and economics in today’s world. Jones utilizes various elements of the Star Wars canon to make this possible, employing this familiar franchise to investigate broader topics. While attending Earlham College in Richmond, IN, Jones first found his love for pottery. Deciding to continue his path as a potter after college, he apprenticed with artist Todd Piker in Cornwall Bridge, CT, from 1994 to 1997 and Pittsboro, NC-based artist Mark Hewitt in 1997. In 1998 Jones moved to Sandy Mush Valley outside Asheville, NC, becoming a Southern Highland Craft Guild member and establishing his studio with his wife Christine Jones that same year. This pottery studio still operates today, and twice a year Jones hosts kiln openings. Jones has exhibited at the Mint Museum, the North Carolina Pottery Center, Blue Spiral 1, and several other galleries and institutions. His artwork first joined the Asheville Art Museum Collection in 2016.

Jones’s utilization of Star Wars came about in 2015, the same year he made the large- scale pot titled Remote by Design. In late 2015 the release of the seventh canonical movie in the Star Wars saga, titled The Force Awakens, influenced the messages Jones hoped to portray when utilizing Star Wars. His 2016 artwork Absent Without Leave uses the stormtrooper FN-2187 (Finn) front and center. In an interview with the Asheville Art Museum in 2021, Jones talked about how he uses Star Wars in Absent Without Leave to make direct comparisons to the Iraq war. He likened the US soldiers who entered Iraq to that of the havoc of the First Order’s deployment at the beginning of The Force Awakens.

Within You Without You drew my eye most immediately out of the three pots displayed in the Asheville Art Museum’s Frances & Pamela L. Myers Lounge. The placement of this artwork, as well as the clear and striking image of Darth Vader at the forefront of the work, are the reasons why I was drawn to this work immediately. Here, Vader represents a person who is more machine than man, symbolizing a machine-like, capitalist America. To the left of Vader’s helmet are quotes from Empire Strikes Back, furthering the narrative associations that Jones brings forth. The words “join us,” “fulfill your destiny,” and “I am your father” all relay back to the idea that our world has become a cog in society’s machine in which every person will become intertwined.

While yes, ultimately, I wanted to speak on how Jones utilized Star Wars by putting it into a real-world lens, there was something more on which I wanted to focus. Being born in the early 2000s, the Star Wars prequels were my childhood. Even as a child, these movies transported me into a world that is impossible to explain. Jones manages to bring me back into this world with his several Star Wars-centric pieces. The story behind how Star Wars came to fruition is, in my opinion, crucial to better understand why Jones’s pots are so powerful.

The creator of Star Wars, George Lucas, managed to tell a story unfamiliar enough to be knowingly separate from our world but familiar enough that real-world influences were still felt. Throughout his two trilogies, Lucas utilized historical events and figures to produce his stories. The empire reflects the Roman or British Empires; the rebellion against the Empire is like the events of the Vietnam War; the Jedi are related to religious groups with “rank” systems; and the fighting style of the Jedi and Sith, along with Darth Vader’s design, was heavily influenced by Japanese culture from the 17th to 19th centuries as well as filmmaker Akira Kurosawa. Beyond employing historical influence in creating Star Wars, Lucas, with the help of author Joseph Campbell’s theory, molded a mythological frame into his six Star Wars films that followed the “hero’s journey.” The character involved in this type of storytelling starts as nobody and eventually becomes entangled in this grand adventure where they learn they are “special” or “the last hope” by someone who mentors them. By the end of this story, our hero has overcome a conflict and there is a happy conclusion. These stories have a level of commentary, whether it be political, economic, social, etc. that is always present. This is no different from Star Wars, which brings about real-world problems in a fictional setting, picturing governmental bodies, corporations, and even human history in a certain light. Forty-five years after its initial release, the popularity of Star Wars is ever-growing and will continue to be an integral part of creating meaningful commentaries relating to our lives.

So to end this as cheesy as possible and perhaps rekindle a feeling that might have grasped you the first time you watched Star Wars, I must say one last thing: may the force be with you.