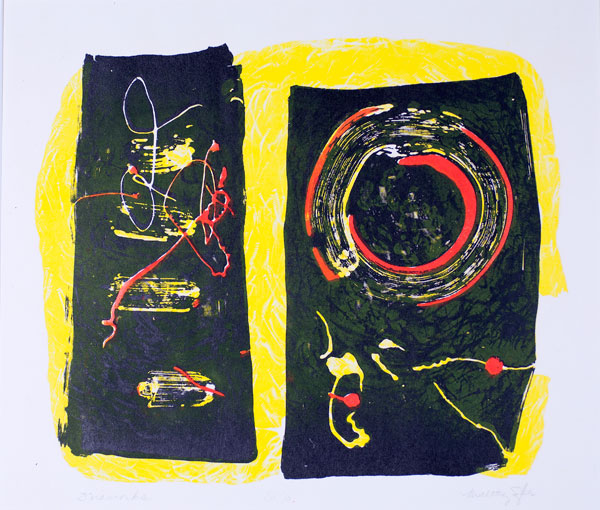 Fireworks is an abstract color lithograph executed in the primary colors of red, yellow, and blue. The artist’s choice to split the composition into two swathes of dark blue over a yellow background may be an effort to detach from naturalistic imagery of fireworks seen in the night sky, and is in keeping with the experimental approach he took to printmaking at this time.

Lindsey Grossman (LG) is the communications manager at the Museum. (We have so many Lindseys on staff that we’ve had to start using nicknames.) Here, she shares her impressions of this work:

I heard the title before I saw the artwork, so my first impression was shock. It didn’t look at all like fireworks. But then it struck me: After the big BOOM, it looks just like it does behind my eyelids if I close them tight right after the brilliant bursts of light. Fireworks might mean something completely different to you, but that’s what I love about abstract art, and about all art really. There’s no wrong way to look at it. And of course now I have that Katy Perry song going through my head.

Maltby Sykes worked in an American Regionalist/Realist vein early in his career, influenced by his time in the lithography studio of master printer George Miller. He subsequently began working in an abstract mode while studying in Paris in 1952 with painter Fernand Léger and intaglio printmaker Stanley William Hayter. Sykes’s affinity for lithography however, spanned across his career, as testified by his 1983 essay “Recollections of a Lithographile.” A professor of printmaking at Auburn University for many years, his ties to Asheville came as the result of spending the greater part of 1960 recovering from exhaustion in the city’s Highland Hospital.