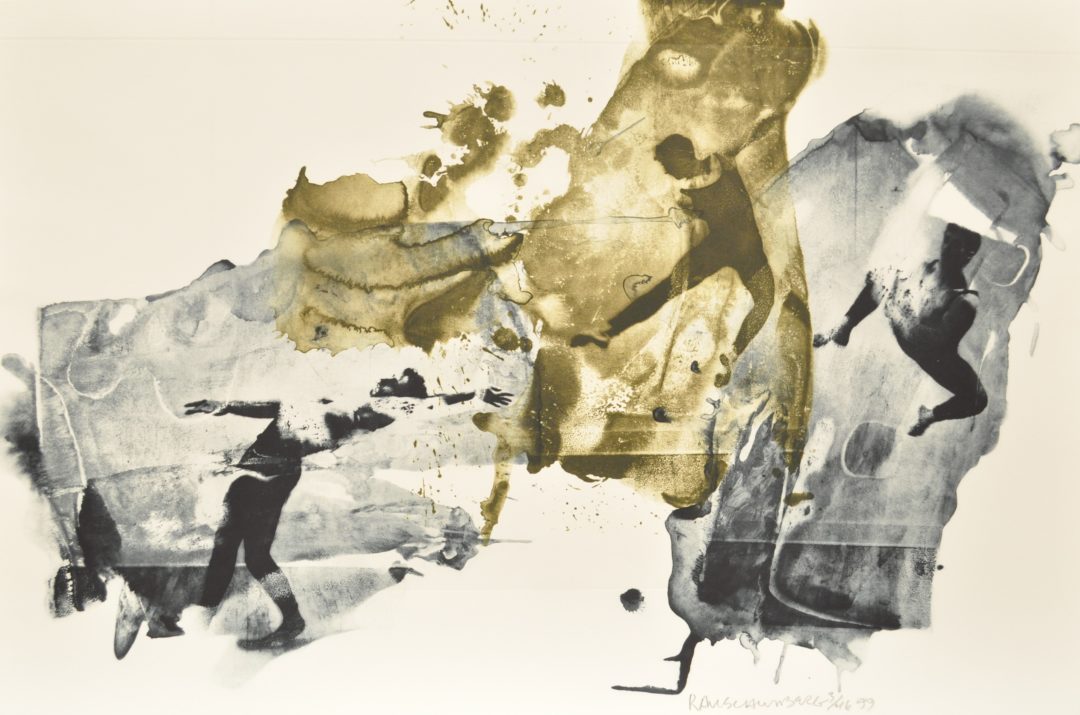 The Museum is grateful to William Newton for gifting the complete Ruminations series by Robert Rauschenberg in honor of his sister-in-law and friend of the Museum, Ladene Newton, on her 80th birthday. The series consists of nine color photogravures which were printed in 1999 and reflect back on Rauschenberg’s life, his friends and family, and the memories he held dear. Each of the nine prints in the Ruminations series are introspective representations of important figures and moments from the early periods of Rauschenberg’s life. He returned to the more restrained gray palette used in prints from the 1960s and depicted scenes from his childhood including his mother and father Ernest and Dora, his sister Janet, his former wife Susan Weil and their son Christopher, Steven Paxton, Cy Twombly, John Cage, Jasper Johns, Tatyana Grosman, Leo Castelli and Illeana Sonnabend.

The series represents especially significant mature work by Rauschenberg that looks back to his most formative moments as an artist including his time at Black Mountain College and the
friendships and ideas formed there. The Museum has works by many BMC artists, from throughout their careers, and BMC is an important collecting focus. In addition, BMC works are shown in a wide range of exhibitions. Rauschenberg is a seminal American artist of the 20th century.

As early as 1960, Rauschenberg began experimenting with printmaking, creating painterly prints using newspaper and magazine clippings. Like the combines for which he is well known, his prints
often incorporated elements of everyday life and common forms like water rings left by a glass or traced outlines of a cane. Rauschenberg’s creative approach pushed fine art printmaking in a new
direction. He collaborated with talented printers and stretched the limits of methods and materials, radically re-thinking traditional approaches to lithography, screenprinting and intaglio, and printing on unconventional materials like cardboard, fabric, and plastic.

Born in Port Arthur, Texas, Rauschenberg served in the United States Navy from 1942 to 1945 before studying art, first at the Kansas City Art Institute in 1947–48, then briefly in Paris, at
the Académie Julian, in the summer of 1948. That fall he enrolled at Black Mountain College in North Carolina in order to study with Josef Albers, the renowned Bauhaus teacher, designer, and painter. Rauschenberg moved to New York City in fall 1949 and enrolled at the Art Students League, where he took classes intermittently through 1952. He also returned to Black Mountain for several shorter sessions. The experiences he had at Black Mountain and the friendships he formed there influenced the improvisational use of materials and collaborative approach that would define his career.

Rauschenberg’s introduction to the print studio ULAE began in 1962 under the guidance of its founder Tatyana Grosman and developed into a close, personal, and fruitful relationship. Over the
years, the artist worked with ULAE’s Master Printers and staff to develop new printmaking techniques and to create over 100 printed editions. In 1997, Rauschenberg began to use an inventive new photogravure technique that would allow him to simulate the vegetable dye transfers with which he had recently experimented in his unique work. By applying existing photo-developing processes to intaglio printmaking a technique was developed whereby photo developer could be brushed directly onto plates containing previously exposed photographic negatives. Certain images would appear on the plates to a greater or lesser degree according to the amount of developer brushed on and the time it was allowed to react, and a washy, painted effect could be achieved. In this way, the unpredictability and spontaneity of painting could be combined with Rauschenberg’s use of photographic images. As Rauschenberg has said of this technique, he was “more or less painting with light,” creating entire pictures with one motion of a brush over a latent image. The chosen images were transferred by photoengraving to more traditional aquatinted copper plates where they could be further altered by the artist’s hand through scraping, burnishing, and polishing before printing the editions.