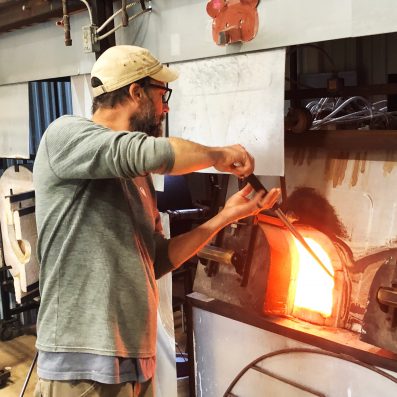 Glass artist John Geci moved to North Carolina in 1995, and the move had a profound effect on his life path. “Like many of the people who go through Penland [School of Craft], I planned to be here for two months,” Geci explained. Little did he know at the time that he would go on to work for different glass blowers in the Western North Carolina area, as well as help at Penland – teaching and maintaining building equipment for them. He then become a resident at the (now defunct) Energy Exchange, a methane-powered glass and potter studio built on an old landfill. After about four years there, Geci saved up enough to buy his house and start building his shop. “I got the studio running in the spring of 2006,” he says. “Pretty much haven’t had an honest job since 1996.”

Geci’s glass studio is located about four miles from Penland, just up the hill from the home he shares with his wife, Courtney Martin, and her pottery studio. The second floor of his space doubles as a gallery where they sell their glass and ceramic wares. “We’re casually open every day,” Geci says. “It’s something that we encourage, because it’s so nice not to travel [to festivals and be available locally]. In the late spring, summer, fall, we get people coming in.”

As the Asheville Art Museum is building its new state-of-the-art facility and encouraging the community to Make It New and Make It Yours, Geci shared that could be a philosophy applied to the community of glass blowers in Western North Carolina. “Everybody has such a different approach to glass and very distinct work, which is something that is so great about this area. On the island of Murano off [the coast of] Venice, where really, to this day, is sort of the most important area of glass, they are notorious for just shamelessly stealing each other’s ideas and designs,” Geci said. “Here it’s so important to have your own style. That sort of work is truly an expression of each individual. I always think that’s a really nice thing, because this area is also extremely open – everyone helps each other.”

With so many glass blowers in the area connected to Penland, Geci alluded to the school (and its close community and small class size) as a reason for this attitude of regional cooperation. “You really see that the golden rule works very well in a small group,” he says. “I think the idea [is that] people who live here obviously want to live out in the country. Part of that is self-sufficiency, but it’s also the idea of being in a small community you help out your neighbors…I have a number of friends that I can just call up and ask for tech support or to talk to somebody about color formulas. In some glass communities there are just treasured secrets, but here, it’s if we disseminate the information we all learn more.”

Likewise, the Asheville Art Museum is proud to be a part of Summer of Glass, a community-wide effort to celebrate the art of glass this summer. From May through October 2018 – coinciding with an exhibition of Dale Chihuly’s immense glass sculptures at Biltmore Estate – artists, galleries, nonprofits, and others are displaying and demonstrating glass from regional historical and contemporary perspectives. About the efforts, Geci shared, “I’m really excited about it. It’s amazing how much energy is going into it.” No doubt this celebration will help tell the story of Western North Carolina’s unique role in the studio glass movement.