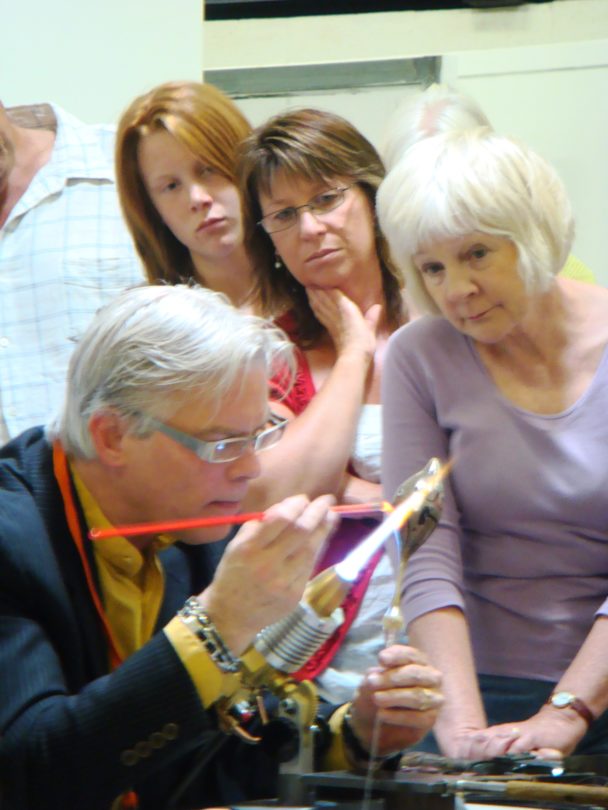 Shane Fero was born in Chicago, IL in 1953 and has been a flameworker for over 50 years, and maintains a studio next to Penland School in North Carolina. He participates in international symposia and conferences by lecturing and demonstrating. Fero is also an educator and has taught at institutions such at Penland School, Urban Glass, the Pratt Fine Arts Center, the Studio of the Corning Museum of Glass, the University of Michigan, Eugene Glass School, Espace Verre, Montreal, Quebec, the Pittsburgh Glass Center, Pilchuck Glass School, Bild-Werk, Frauenau, Germany, the International Glass Festival in Stourbridge, UK, Scuola Bubacco, Murano, Italy, Chameleon Studio, Tasmania, Taiwan, China, Australia, Turkey and in Seto, Osaka, and the Niijima Glass Art Center in Japan. His work can be found in collections both private and public institutions worldwide. He has had over 33 solo exhibitions since 1992 and has participated in over 400 group exhibitions during his career. He has been honored with three retrospectives; a 30 year at the Berkowitz Gallery at the University of Michigan in 1999, a 40 year at the Huntsville Museum of Art in 2008, and at the Christian Brothers University in 2010. His work can be found in over 30 museum collections worldwide including the Museum of Art &amp; Design NY, The Corning Museum of Glass NY, GlasMuseum, Denmark, the Asheville Art Museum, NC, the Huntsville Museum of Art, AL, the Museum fur Glaskunst, Lauscha, Germany, and the Nijiima Contemporary Glass Museum in Japan. He is the Past-President of the Board of Directors of the Glass Art Society and received the Lifetime Membership Award from GAS in Chicago in 2014, honored in 2009 for Extraordinary Contribution to the Glass Art World, Salem Community College, Carney’s Point, NJ, and Award for Significant Contributions to the Chinese Glass Community from the Hejian Government, Hejian, China in 2017.

Shane Fero: First of all, I conceive of an image of a bird, a shape, colors, patterns, and gesture (which may reveal itself near the end of the actual process). It could come from a dream, an actual bird I have seen or studied, or an imaginary bird I conjure up.

Secondly, I have plates of color, powdered glass laid out. I pull a point (a tube section that is tapered down from the tube with one side being the blowpipe and the other the punty or handle section) from a tube of clear glass usually.

I then heat the center section of the point in a glass torch to roll it in the powders to build a colored canvas. I have pre-pulled colored canes of glass from larger bars and I use them to flame draw designs and patterns on the tube. It may take many steps to build my imagery. When I have achieved my desired imagery, I begin heating sections to manipulate the tube and end up blowing the bird into shape. Later, I take off the tail (punty) and add the feet. When it is annealed, it is acid-etched, most likely by my wife, Sallie.

Tell us a little more about your raffle piece Quilted Bluebird. What was your source of inspiration for this work? Is this work a part of an ongoing series or body of work? What inspired the title of this work?

Birds have always been part of my imagery since I was a teenager. How it has developed are many different stories. The present series began in 2002 when I was invited into a multimedia bird exhibition show at the Blue Spiral1 Gallery. lt was also a response to the malaise of 9/11 in a spiritual and economic sense as well.

“Quilted Bluebird” is based on the idea of a bluebird of which I have made many different forms, techniques, and colorations. I was thinking of the quilts, which we see as part of the heritage of the area in which we live. We also see the quilts displayed on barns and other buildings throughout the south and with Devon, my daughter, and Sallie, my wife, we saw the “Quilts of Gee’s Bend”, at the High Museum in Atlanta some years ago. Letting impressions influence me is very important to my work.

How does your work tie into the Asheville area or the Blue Ridge Mountains?

Having opened a gallery and studio in the Adirondacks when I was 24 allowed me to explore different themes, especially from nature. The mountains were a great inspiration for me and I lived there for eight years. In 1983, my wife and I came to the NC mountains on our honeymoon and we were hooked. We came back to every year in the fall and also started a relationship with John Cram and New Morning Gallery where I sold my work until I joined Blue Spiral 1 in 1990 and also moved to Penland as well.

During my 50+ year career I have been fascinated with and have rendered bird imagery into my work in various forms. This focus has sharpened in the last 18 years with the blown bird series, which is based on techniques of German flameworking. I learned these techniques when I was a young apprentice, although I brought them into a contemporary context in relation to my work. I have always combined bird and human elements in my sculptures, vessel forms, and mixed media pieces. The present bird series began after 9/11 to counter the mood and malaise of that time period. Birds have that special metaphysical and spiritual quality, which is reflected in their colors, gestures, song, and flight. Plus, I love to invoke humor and character into these pieces, especially in the titles. I have also added bird prints in the medium of vitreography printed at Harvey Littleton Studios, watercolors on paper, and paintings in acrylic on canvas to the mix.