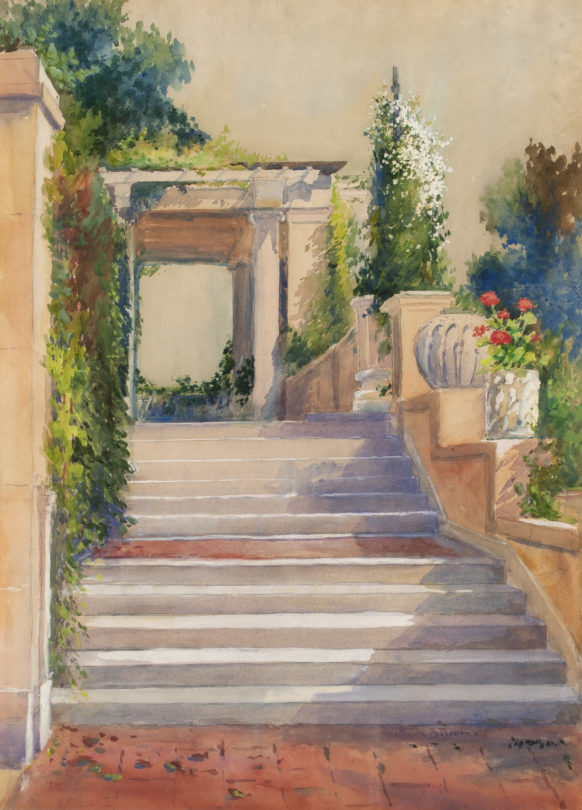 Steps to the Garden—recently gifted to the Museum by Mary & Jerald Melberg—portrays a serene, figureless exterior scene with steps leading the eye to a foliate trellis. Boston-based artist Gertrude Beals Bourne (Boston, MA 1868–1962) embraced a stylistic approach to representational painting that engaged trends of American Realism and Impressionism that persisted into the early 20th century in the United States.

Beals Bourne’s preferred media were gouache and watercolor, and she most frequently depicted landscapes, often with floral gardens and structures grounding her scenes. Steps to the Garden demonstrates her distinct approach to watercolor, with loose brushstrokes that echo the work of her peers, including Childe Hassam, Winslow Homer, and others. The artist also studied at length and marked the influence of the watercolors of John Singer Sargent; the Museum of Fine Arts Boston acquired several Sargent watercolors in 1912, which she copied as an academic exercise.

Beals Bourne, born in 1868, grew up on Dartmouth Street in Boston, MA. She studied with artists Henry Rice, Ross Turner, and Henry B. Snell, the latter of whom co-founded the New York Watercolor Club. Beals Bourne regularly exhibited at the Boston Art Club, the New York Watercolor Club, and later the American Watercolor Society over a multi-decade career from the 1890s to the 1940s. Her artistic circles in Boston included the artists Maurice Predergast and Laura Coombs Hills, as well as landscape architect of Biltmore Estate grounds, Frederick Law Olmsted.