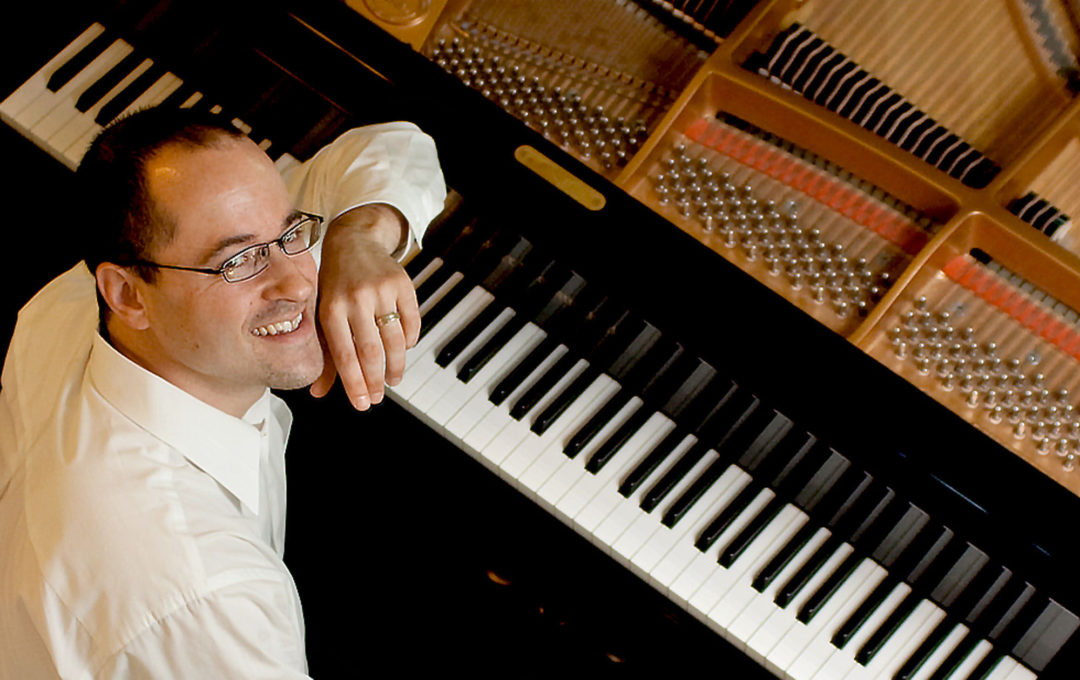 On April 22, 2018, the Museum is thrilled to welcome Alexander Schwarzkopf back to Asheville to perform during our 9th season of Pianoforte. Pianoforte features outstanding piano talent originating from, living in, or connected to the greater Asheville area. Schwarzkopf performed previously with us solo in 2014, and as a duo with John Cobb in 2015.

Alexander J. Schwarzkopf was born in Colorado Springs, CO. He has given concerts and master classes in the United States, Brazil, Germany, and Italy, and was a finalist at Val Tidone’s Silvio Bengalli International Piano Competition in Pianello, Italy. Also an active composer, Schwarzkopf was named the Oregon Music Teachers Association’s 2017 Composer of the Year. His teaching appointments include visiting artist piano faculty at the University of New Mexico and faculty at the Klavierfestival-Lindlar and Deutcher Ton Künstler Verein’s Musik Aktiv festivals in Germany. Schwarzkopf holds a doctorate in piano performance from the University of Oregon, and currently lives and conducts his private teaching studio in Eugene. His incisive recording of Falko Steinbach’s “Figures: 17 Choreographic Etudes” is available on Centaur Records.

Our Pianoforte patron Harry Rowney recently interviewed Schwarzkopf about the eccentric program planned for April 22, and what brings him back to Asheville.

HARRY ROWNEY: You currently live in Oregon, but have family connections to Western North Carolina. What makes you want to travel 3000 miles to perform?

ALEXANDER SCHWARZKOPF: I enjoy these questions since I think about these things frequently. I believe in making the effort to travel to perform due to my feeling that music is originally a form of oration and a means for communicating emotion and sensitivities. There could be no better reason why such great works emerged from the hands of all composers, past and present. Imagining that Brahms, for instance, would have sat down to compose any one of his works, small or large, with nothing more than a desire to exercise his mastery is simply unthinkable to me! I feel the same about Webern, Berg, Bach, Beethoven or any others. It seems there are some composers who have far more to do with process in their music than others; however, even there one can hear and feel the effects of the combinations of tones and rhythms on their being and psyche once the music is in motion. I often experiment while practicing, and play very rhythmically-upright and “boring” in order to check whether or not the alignments are correct and so on. Even then – it is amazing – sensitivity still emerges. Perhaps some of that is partially up to how music reaches more deeply into some people’s souls than others. But either way, it is the combination of these elements that produce subtleties and affects that then contribute to the shaping and developing of timbre and temperament.

HR: For this performance, you have chosen Berg’s lyrical single-movement sonata, Debussy, Chopin, and Brahms’s second sonata to explore aspects of sound and existence. What drives you as a pianist and composer? Inspires you?

AS: I perform music because I believe music must be performed live in order to truly experience it. That goes for performers and audience alike. It is risky at times due to the nature of the writing and nuance that each composer imbues into their music. I have a deep affinity with Berg and his expressionism in the Sonata. This piece has been with me for many years, and I have always had a deeply gratifying experience with it. This can be said of all of the music on this program – even VLA, which was composed 102 years after Debussy’s Etudes! However, it is also representative of my tendency to always write music, no matter the structure of the sound and rhythm, in a way that is sensitive, nuanced and expressive.

Debussy’s Preludes and Etudes are, in my humble opinion, some of the finest compositions ever written. The timbre and textures found throughout all of his music, but particularly in the Preludes and Etudes, are extraordinary. [They give] you a sense of the scope of his imagination and innovative genius. I also enjoy his attention and connection to the natural world and the subtleties of the elements.

Chopin’s Première Ballade in G minor is outright mastery. Like Schumann said, it is one of his wildest children! The brilliant pianism, poetic expressivity, passionate outbursts, and virtuosity speak volumes of Chopin’s expressive capabilities as a pianist, composer, and teacher.

It takes time to be able to really grasp the full dimensions of Brahms’ second sonata. It is a particularly curious piece in his oeuvre, since it is at once a precocious composition while simultaneously exhibiting early mastery of symphonic structure, harmonic and rhythmic ingenuity. I find it also possesses a different versatility and energy than the dense first and the rhapsodic third sonatas. The second sonata is something of a hybrid – at once classical yet completely romantic in structure, style, and expression. I also see Schumann’s influence on the young Brahms here; no doubt he learned a lot from the older master. And that Brahms dedicated it to Clara exhibits his admiration for her as both pianist and friend. I particularly enjoy the motivic unity evident in this work; it is very demonstrative of Brahms’ early understanding and usage of continuous variation and thematic transformation. The extent of the bravura and virtuosity here cannot be underestimated. Brahms’ music requires incredible stamina and train of thought as well as the ability to dream. He was a great pianist, as evidenced in all of his piano works, specifically the early to middle opuses. The Viennese elements, for instance the Ländler, are so prominent in this composition. But it also displays a certain Hungarian quality that one can never overlook in Brahms’ music. I love that Brahms gravitated to this style coming from northern Germany!

So, I begin the program in Vienna, take a trip through Paris, then to Warsaw by way of Paris, then into outer space, and finally end up back in Vienna! What a trip. It seems eclectic, but I think it is rather more about how each of these composers and works are influenced by other mediums or disciplines. Berg composed in a manner that exhibits a learned style – contrapuntal and deeply-rooted in his teacher Arnold Schoenberg’s expressionist style. However, the lyrical tendencies evidenced in the Sonata and later works such as the Violin Concerto clearly permeate all of his works. Debussy obviously drew great inspiration from the power of natural elements, such as water and wind, as well as poetry and philosophy.  The forms that Chopin expanded in his compositions such as the Ballade, wherein he even maintained much of the original structure of the English ballad, and the rhythmic structure of the Mazurka and the Polonaise exhibit strong cultural connections translated into concert and salon music. My own interest in the intersection of visual art and music, and the influence of my research in translating contours of musical lines into visual artwork, exhibit my passion for the importance of embracing a truly interdisciplinary approach in my work. And finally, it is clear that Brahms was destined to be one of the great symphonists in the way he cast his ideas in vast forms and imposing structures and sonorities. The declamation also clearly exhibits a linguistic quality that is at once reminiscent of poetry and music’s roots in philosophical oratory traditions.