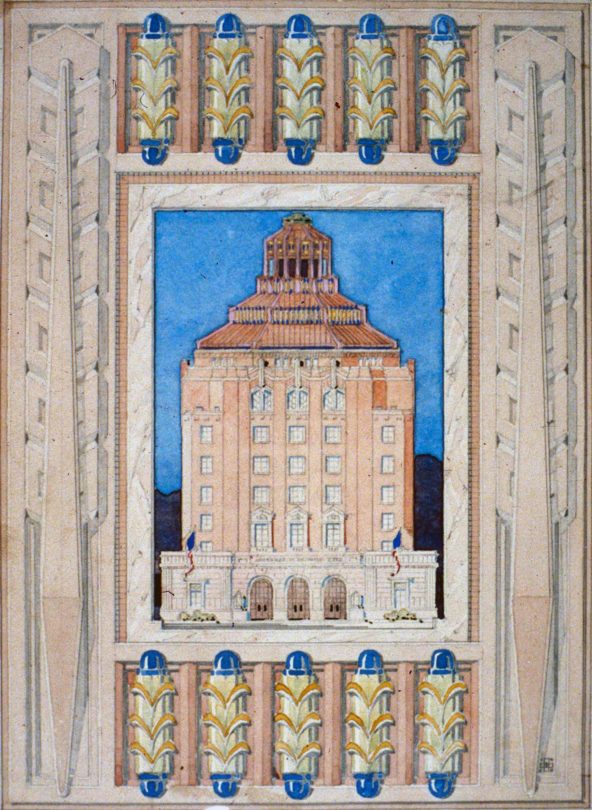 With the skills he gained while training under renowned architect Paul Philippe Cret and his exposure to Art Moderne—later known as Art Deco—while studying classical architecture before World War I at the École des Beaux-Arts in Paris, Douglas D. Ellington developed his ability to shift easily between classical architectural traditions and Art Deco’s new forms. The Asheville City Building painting he completed in 1928 masterfully combines the two styles to create something new.

As seen in this watercolor, the classical base of the building follows 19th-century Beaux Arts principles, with Roman lettering on its frieze and a triple-arched arcade, while the ziggurat roof is a popular 1920s Art Deco reflection on Mayan pyramids. The blue, yellow, and green of the roof’s botanical- and geometric-shaped tiles were drawn from the bright colors and bold shapes discovered at the 1922 opening of King Tutankhamen’s tomb; Egyptian motifs were another common Art Deco design element. The stylized feathers visible throughout the building reference Cherokee designs, as American Indian patterns were also part of the Art Deco lexicon. The colors of the marble and brick echo the red clay land upon which the building stands, and the stepped-back roof echoes the mountains surrounding downtown Asheville.