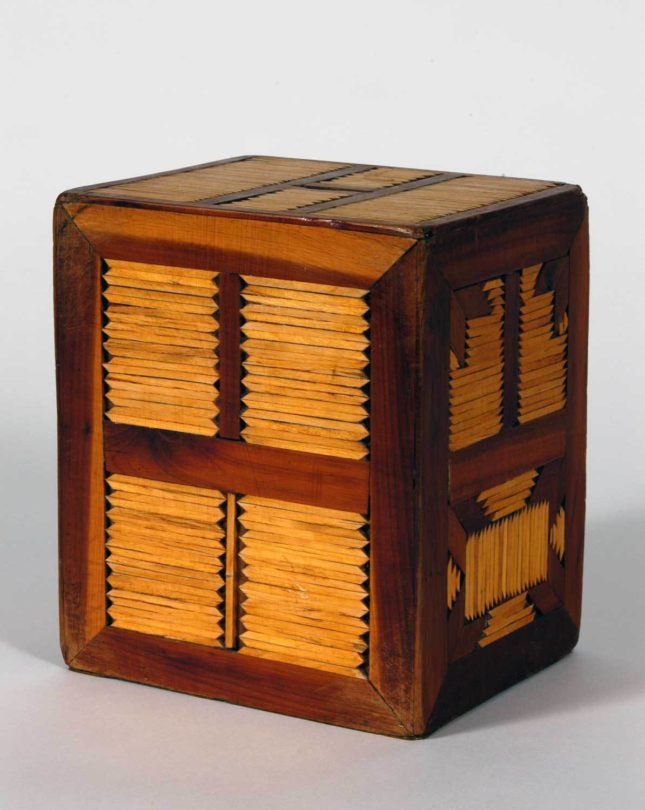 This coin bank is featured in the first gallery of Intersections in American Art, the reinstallation and reinterpretation of the Collection of the Asheville Art Museum. The artworks it is grouped with represent early tourism and the craft revival of Western North Carolina. After the arrival of the railroad to Asheville in 1880, the region saw an increase in tourism. Artists that lived in the area quickly caught on and started to create small souvenirs for tourists to purchase. Baskets, woodwork, ceramics, and rustic furniture were produced from local materials and often had the word “Asheville” inscribed on them. Also popular at that time was folk art or work by self-taught artists. Their artwork was often made because it delighted them to do so, not necessarily because of a motivation to sell. The coin bank by Samuel Wilson Jacobs is the earliest example of self-taught art in the collection, as well as our oldest artwork by an African American.

Samuel Wilson Jacobs moved his family to Asheville, NC, in 1910 from bordering McDowell County. They lived in the East End neighborhood on Valley Street (now South Charlotte) in the African American center of town. Jacobs was an agricultural laborer and carpenter of houses. He created small trinket boxes, larger chests, and figurative pictures, all using carved and inlaid woods and veneers. As this was something he did in his spare time—for fun or possibly extra income—his skill is often overlooked. However, the intricacies with which he inlaid the wood were impressive. It is hard to know for certain that this coin bank was made by Jacobs, as he did not sign it, but the style, designs, and materials used all indicate it is his handiwork. Because so few examples of his woodwork are known, it is possible that Jacobs was crafting his creations as gifts to his friends and family around him.