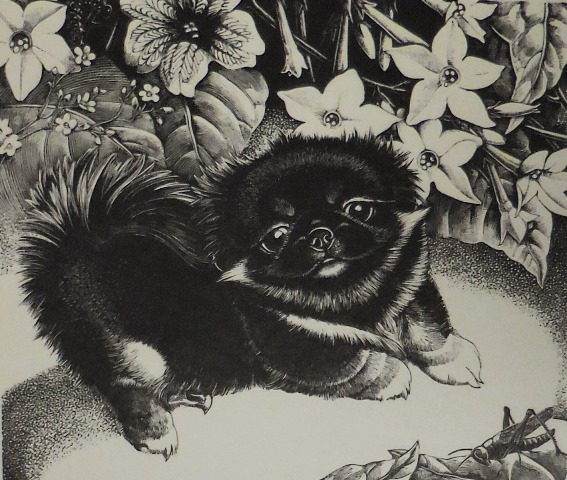 An adorable young puppy is caught in mid-movement looking up at the viewer, momentarily distracted from its discovery of a grasshopper in a garden. From the text that accompanied the publication of this print, we learn that the title Kou Hsiung (which translates as “dog-bear”) is the name of the artist’s Pekingese puppy. She states that the image was made “simply to arrest time and to hold in suspension and memory a moment of puppyhood.” Despite this declaration that the image is intended to be straightforward, with no hidden meaning, another perspective is provided in Lathrop’s words from a 1938 speech regarding artists’ ability to see interconnections in nature, on a deep level:

No one, I think, is more convinced of the unity of all life than the artist, who sits before its different phases so long and silently, seeing them in a great intimacy. He not only beholds the flower, but he feels the life that, even while he draws, unfolds the petals, senses the force that pushes new leaves from the ground. He traces a network of veins in leaf and flower akin to the veining which shows under his own skin. He knows that under the microscope it is hard to tell which veins are plant and which animal, and whether that is sap or blood flowing so steadily through those channels. In that deep silence in which drawings are made, he so projects himself into the personality of any living model before him, that he becomes strangely identified with it. He not only feels himself a brother to this creature whose atoms are held together by the same mysterious force or vibration, not only feels the same life surging through them both, but, such is his intensity of interest, he becomes that creature. Or, as the eastern philosophers put it, he “sees all creatures in himself, himself in all creatures.”

After reading the artist’s own words about her experience connecting to plant and animal life at an atomic or vibrational level, does that change how you see Kou Hsiung?

Dorothy Lathrop (1891–1980) was a printmaker, woodblock carver, and illustrator who specialized in animal subjects. She studied at Columbia University, the Pennsylvania Academy of Fine Arts, and the Art Students League of New York. She authored and illustrated many children’s books, including The Little White Goat, The Snail Who Ran, and Who Goes There? In 1938 she received the first Caldecott Medal ever awarded, for Animals of the Bible. In 1949 she was elected an associate member of the National Academy of Design.