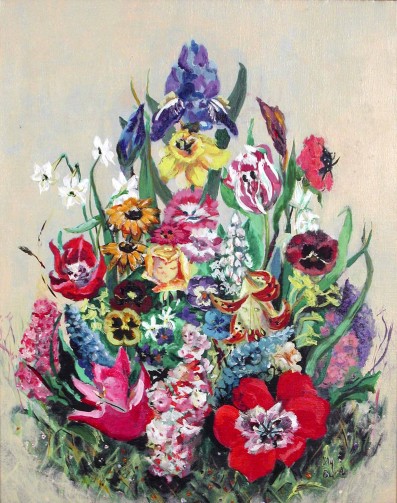 I recall the first time I read Alice in Wonderland. I was in the third grade and had stumbled upon it in my elementary school library. I was initially drawn to the whimsical illustrations, but as soon as I began reading it I fell even more in love with the iconic fairy tale. After that, I watched the old Disney film and adored its dreamy nature, particularly the characters of the Cheshire Cat and the singing flowers. This oil painting by Lily Byrd, Faces in Flowers, reminded me of the whimsy of the movie and story. Hidden among the flowers are tiny faces, complete with beady, wondering eyes and calm faces, just like those in Alice in Wonderland.

Byrd was born in Asheville but studied at schools throughout New England, with most of her time spent in Massachusetts. Her art focused on dreamy landscapes as still lifes, like Faces in the Flowers. Before her death in 1999, she lived in Nashville, TN where she often designed sets for local theaters. She passed away in New Mexico in her home.

This painting is also fitting because spring begins this week! I am thrilled for the warm weather and gardening season ahead (I adore growing my own flora!) as well as my many spring adventures in the future. Hopefully Mother Nature will soon blossom joyfully just as the flowers of Byrd’s imagination did. I hope you all have a whimsical and wonderful season.