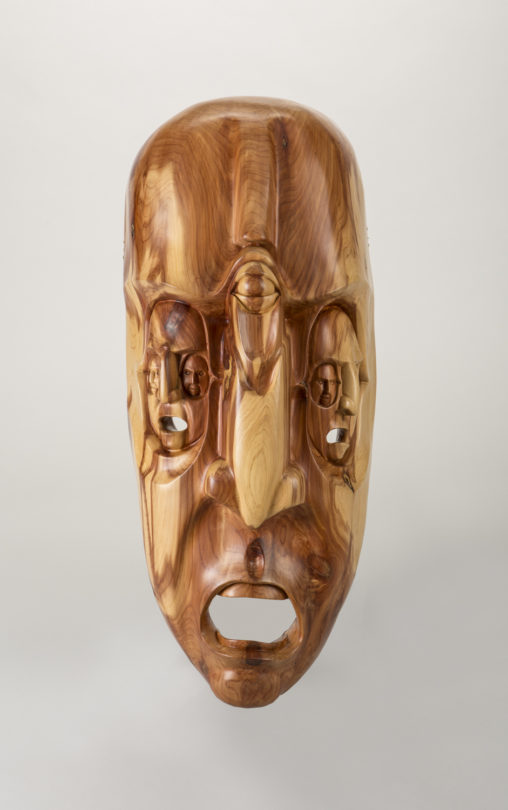 Eastern Band of Cherokee Indians artist Joshua Adams works primarily in wood and sculpture and is part of a long lineage of Cherokee woodcarvers. He described False Faced God, sharing his insights into the depth of meaning behind this work:

The original concept for the mask was directed at addressing the lack of a godhead figure within Cherokee culture. Knowledge of the ancient Cherokee religion and practices vary from clan to clan. Our belief in a god or gods seemed directed toward nature and our place within nature. The sacred number seven is referenced in the actual number of faces within the piece and used in reverence. Seven layers of existence, god living on the seventh plane, seven sacred clan houses. The piece also represents unity within the universe, separate faces ultimately returning to the highest form of enlightenment.

Assistant Registrar Chris Whitten chose Joshua Adams’ False Faced God as one of his favorites in the Collection, explaining, “I am drawn to the faces that have replaced the eyes. This feature makes me think of the phrase ‘the eyes are the windows to the soul’ and how False Faced God is both appropriate and cleverly titled.”

This mask will also be featured in Intersections in American Art, the reinstallation of the Museum’s Collection, and the accompanying catalogue.