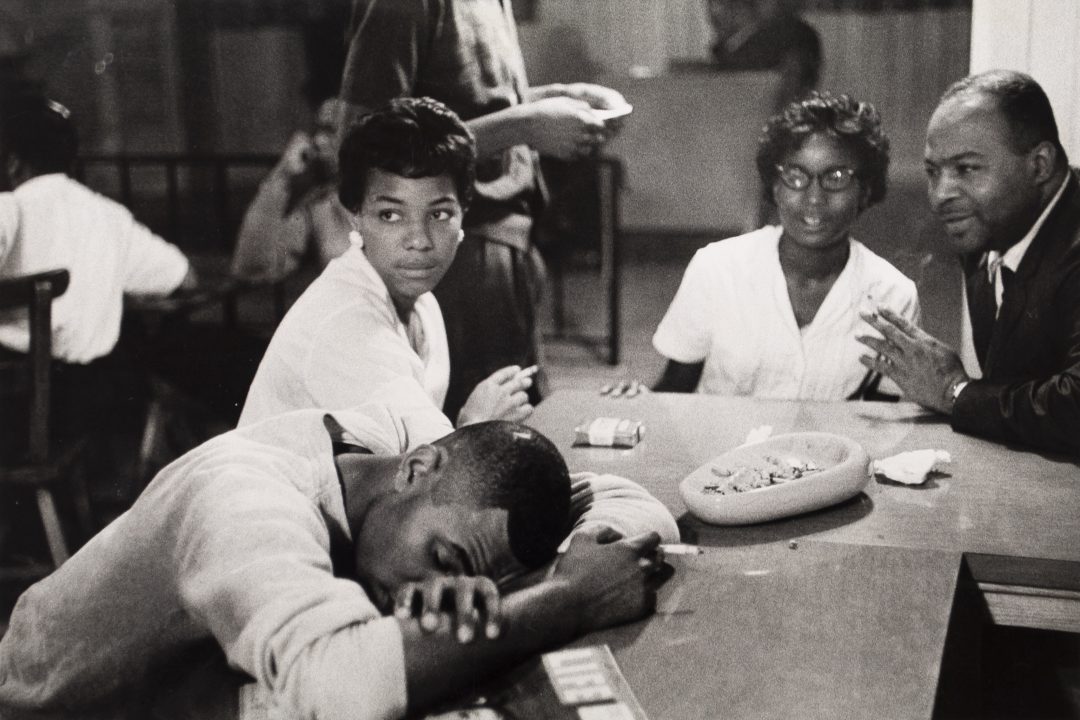 As a collections management intern during the spring semester, I was very fortunate to help catalogue dozens of Bruce Davidson’s photographs. The most striking of these photos for me were from his Times of Change series. When these images were taken, Davidson had been practicing photography for nearly twenty years since the age of ten. His graduate studies took place at Yale University where he studied under artists and designers including Joseph Albers. Shortly after graduating, Davidson worked as a military photographer before beginning his extensive documentation of the civil rights movement, including the Freedom Rides of 1961.

This photograph is a beautiful black-and-white gelatin-silver print that is rich in a wide array of tonal values. Prints such as this require the application of a photo-sensitive layer of silver salts that are suspended on a gelatin matting agent. Traditionally, these ingredients are fixed to a special baryta paper. The inscription on the back of this photo reads:

“Headed for Georgia, Alabama, and Mississippi, at every stop the Freedom Riders made, the KKK and other segregation supporters greeted them with violence and protest. Because the local authorities were unwilling to protect the Riders, President JFK sent 500 federal marshals to do the job. The Freedom Riders also campaigned for desegregation in restaurants, lunch counters, and hotels. In response to their efforts, the Interstate Commerce Commission issued the necessary orders to end racial segregation in bus terminals in Sept. 1961 and it went into effect in Nov. 1961.” —Bruce Davidson

This photograph captures a rare moment between four founding Freedom Riders, three of which are known as inaugural members of the Congress of Racial Equality (CORE). This group, along with the Student Nonviolence Coordinating Committee (SNCC), organized the Freedom Rides. These protests were a large push to end segregation in the South, specifically with public transportation. Over its course, this demonstration inspired nearly 500 volunteers that were mostly between 18 and 30 years of age and reached 39 states. The Freedom Rides used non-violent protest and de-escalation training influenced by the teachings of Mahatma Gandhi. May 4, 1961 was the day the first freedom riders left Washington, DC to enter the Deep South. May 4, 2021 marks 60 years since this heroic task officially started.

I was initially captured by the honesty of this moment between friends sitting at a lunch counter. However, I also consider the underlying fear, tension, determination, and empowerment they may have felt as they made keystone stances against a segregated America. As their bus made its way from Montgomery, AL to Jackson, MS they had to stop for food and rest. By this point, some of the Freedom Riders had experienced mobs, arrests, and slashed tires. In Anniston, AL there was even a firebombing by the KKK. This bombing, despite its atrocious intent, marked a turning point for Freedom Rides and inspired many new and enthusiastic activists.

On the far right of the photo is James Farmer, the national director of CORE and a key civil rights activist. He was the head organizer of the Freedom Rides. Sitting next to Farmer is Lula Mae White, who was inspired by photos she saw in a newspaper and joined CORE in May 1961 at only 22 years old. She was one of the 300 individuals who were arrested during the protests. At the moment of this photograph, Davidson seems to focus the camera on the woman next to White, though her identity remains a mystery. Perhaps Davidson sensed the still expression on her face as she looked to the corner of the room. She is distracted from Farmer as she and White take notice of whatever is going on over Davidson’s left shoulder. Behind this unknown seated figure is presumably a young man reciting notecards, perhaps for de-escalation scenarios. Behind him are other Freedom Riders who are also sitting in conversation. Much about this moment captures the essence of a memory, offering small fragments of something quite momentous.

The figure in the foreground of the photo is most likely John Lewis, who grew to be a key leader of the Freedom Rides. He is known for later serving in the United States House of Representatives for Georgia’s 5th congressional district from 1987 until his recent death in 2020. The Freedom Rides awoke a spiritual calling to the civil rights movement for many. Lewis seems exhausted at this moment, resting his head after recent attacks. The scar on his head was obtained when he was hit with a wooden crate in Montgomery by a violent pro-segregationist mob member. In 1965, Lewis received far more serious head injuries during his March to Selma at the Edmund Pettus Bridge. His life was a testimony to his resolve in bringing justice and visibility to the Civil Rights Movement. Underneath Lewis’s elbow in the photo is the May 5, 1961 edition of LIFE magazine; its cover featured Anna Maria Alberghetti’s Broadway debut. Coincidentally, Davidson got his first job as a freelance photographer with LIFE and Magnum Photos just three years earlier.

Upon the completion of his documentation of the civil rights movement, Davidson received the first-ever photography grant from the National Endowment for the Arts. Despite the emotional tolls of these events, these young civil rights heroes achieved great progress towards a less racially divided America. The Freedom Rides inspired similar protests in Australia in 1965, which pushed for desegregation and the rights of Aboriginal people. These photos also reminded me of recent Black Lives Matter protests and the important legacy of the civil rights movement. I recognize the immense bravery these figures possess. I’m also inspired by their dedication towards a more equitable American experience; their story strengthens my belief in the possibilities of progressive change. The experience of cataloging this series makes me aware of the historical significance of art, especially photography, when it comes to recording times of change.