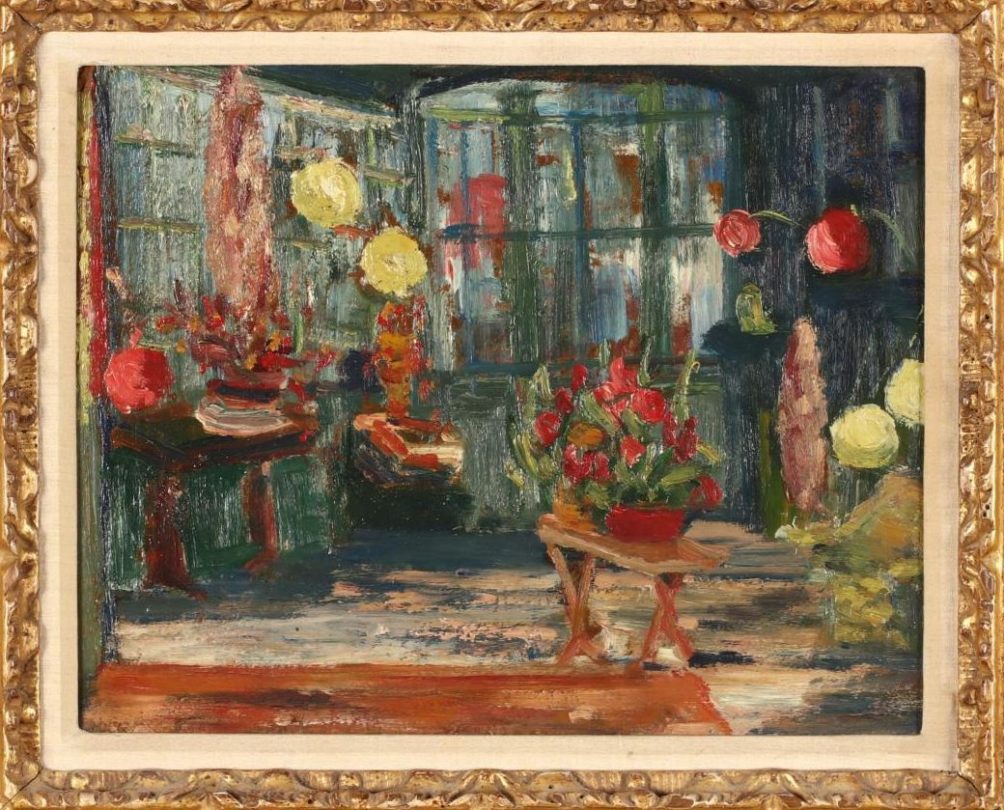 An intimately sized painting by Dorothea Dreier, Interior with Chinese Lantern, is on view now in the SECU Collection Hall. It’s always impossible to pick one favorite artwork, but for its loose, relaxed brushwork and vibrant color palette packed into a roughly 8-by-10-inch canvas, this painting is one of many that I adore most. This artwork always hangs in my mind long after viewing it. In a recent bout of research in my work as a curatorial assistant here at the Museum, I was learning more about Dreier and her connections with other artists in her creative circles. An intriguing facet of art history is the investigation of the interweaving connections, relationships, and friendships among artists. Throughout the Collection, there are ample opportunities to learn about how artists worked alongside, worked together, and taught one another.

Dreier’s artistic connections were both professional and familial. Born in 1870 in Brooklyn, NY, she was one of five children in a socially progressive, financially fortunate family of German-American immigrants. Dorothea Dreier became an artist alongside her younger sister Katherine Dreier (1877–1952), whose artwork is also held in the Museum’s Collection. Both sisters painted in a Post-Impressionist style, while Katherine went on to champion abstraction throughout her artmaking career. With the support of her sister, Katherine founded the Société Anonyme in 1920 with artists Marcel Duchamp and Man Ray; the group was dedicated to exhibiting and promoting modern art among American audiences. Because Dorothea died some 20 years before her sister, Katherine’s artwork is more known and widely studied.

Dorothea Dreier’s connections to the history of modern art in the United States extend to the next generation of her family, as well. Dreier is the aunt of a Black Mountain College (BMC) founder and artist Theodore Dreier Sr. (1902–1997). Dorothea passed away in 1923, but her sister Katherine went on to lecture at BMC.

Dorothea Dreier trained at the Art Students League and the National Academy of Design in New York, NY, and travelled abroad to Europe to further her art education. Some of her teachers included John Twachtman and Walter Shirlaw, as well as William Merritt Chase.

I was excited to learn that Dreier was the student of American painter William Merritt Chase, whose work was recently on view in Across the Atlantic: American Impressionism Through the French Lens. Other famous students of William Merritt Chase include US artists Georgia O’Keeffe, Marsden Hartley, Edward Hopper, and Joseph Stella. I wrote my graduate thesis on Chase, and am an immense fan of his paintings depicting his eclectic studio interior and the interiors of his family homes.

Dreier’s impressionistic brushstrokes and subject matter of a decorated interior are not surprising in connection to this teacher. It seems both were fans of viewing and depicting objects collected from around the world. In Interior with Chinese Lantern, I can certainly see stylistic influences from other American Impressionist and Post-Impressionist painters of the period, but Dreier also brings a style to her brushwork that is all her own.