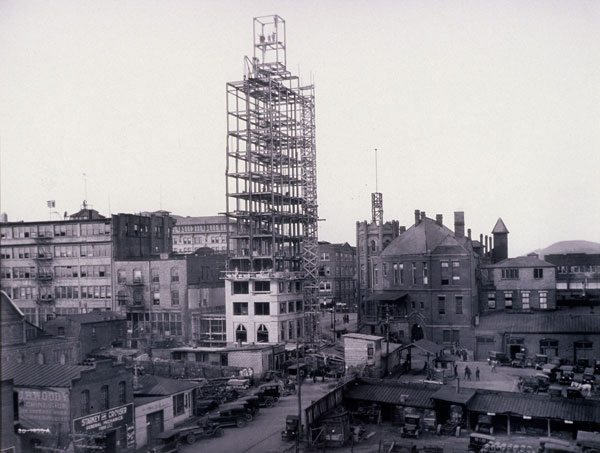 Jackson Building Under Construction is a photograph that captures the early history of Asheville’s first skyscraper. At 13 stories high, it was the tallest building in Asheville until the construction of the Northwest Bank Building (now the Arras building) in 1965. This photograph shows its impressive silhouette in downtown Asheville’s skyline that can still be seen today. (There is an especially cool view from the Museum’s rooftop!)

Communications Intern Genevieve Munch tells us why she selected this photograph as the Work of the Week:

I like to think of works of art as many lenses through which to consider the past, and I was drawn to this photograph for that reason. For me, it can be easy to forget how much history any given place holds day-to-day. Photos like these are straightforward yet poetic reminders of a place’s story. Especially right now during the Museum’s expansion, I’ve found myself wondering about the other buildings near Pack Square, and really love seeing these documentation-style photographs in the Collection.

Ewart M. Ball (1894 – 1937) was a photographer born near Marshall, NC. After traveling and practicing photography in different locations, he eventually settled in Asheville, where he operated a commercial photography business. He also provided photographs for the Asheville Citizen-Times.

Ball’s many photographs often depict the environment of downtown Asheville, whether it be the people or the buildings. His photographs offer an impressive visual account of Asheville in the early 20th century.