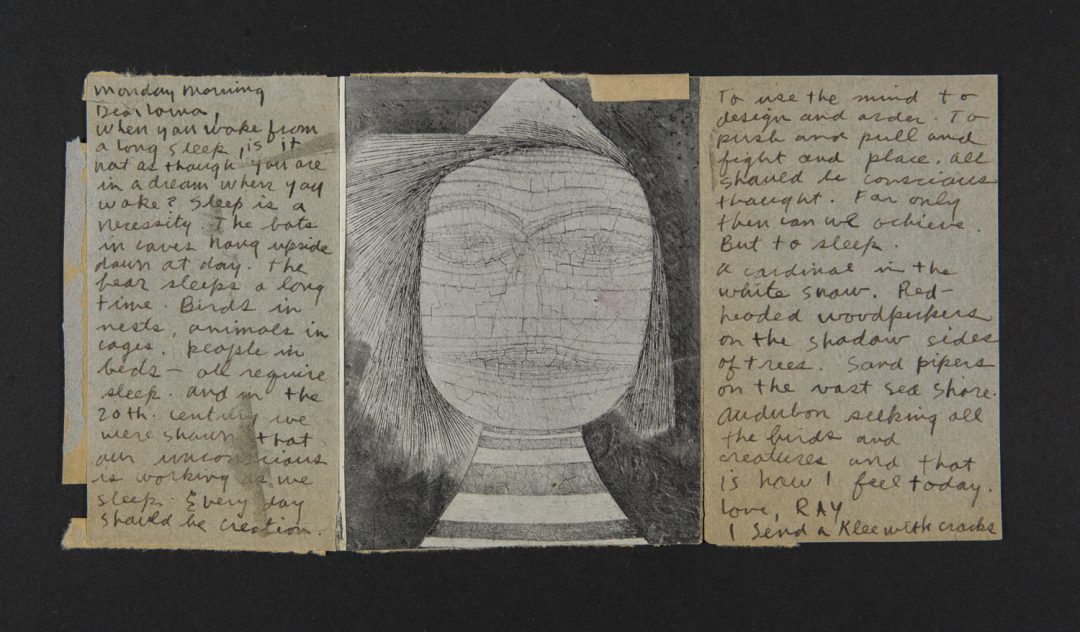 Ray Johnson, a graduate of Cass Technical High School in Detroit, enrolled at Black Mountain College for the 1945 summer program. With the exception of the 1946 spring term when he visited New York City for the first time, Johnson remained at the college through the 1948 summer session. Johnson is credited with conceiving of “mail art,” an art form that transcended time and place and united a widely disparate group of artists and writers in a collaborative conversation. It bypassed the gallery and museum establishment and enlisted the United States Postal Service as an unwitting collaborator. Johnson’s letters to Halper (then named Lorna Blaine) in spring 1947 are among his earliest work in this art form. In these, as in later work, he makes use of scrap materials, constructs an intricate system of references, creates lists of items, and adds enclosures. Johnson was a painter, collagist, and founder of the movement known as the New York Correspondence School.

When you wake from a long sleep, is it not as though you are in a dream where you wake? Sleep is a necessity. The bats in caves hang upside down at day. The bear sleeps a long time. Birds in nests, animals in cages. People in beds—all require sleep. and in the 20th century we were shown that our unconscious is working as we sleep. Every day should be creation.

To use the mind to design and order to push and pull and fight and place. All should be conscious thought. For only then can we achieve but to sleep. A cardinal in the white snow. Red headed woodpeckers on the shadow sides of trees. Sand pipers on the vast sea shore. Audubon seeking all the birds and creatures and that is how I feel today.

I send a Klee with cracks