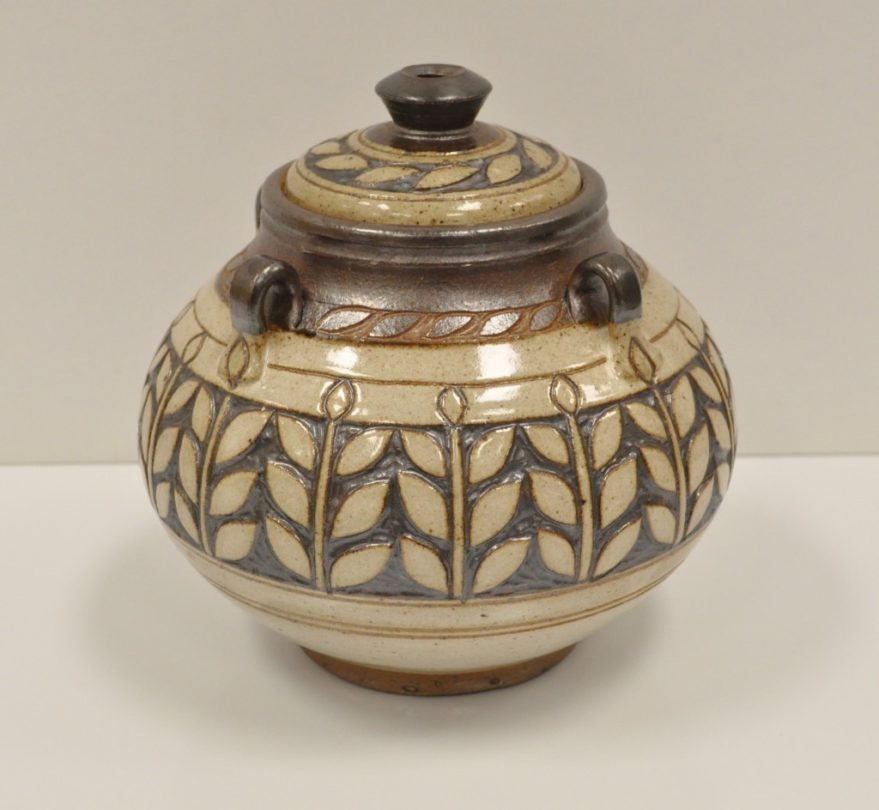 Kate Johnston was born in 1988 into a creative family in New Jersey and started making pots early in her life. By her teenage years, she worked at a local community school clay department, and later trained at the prestigious New York State College of Ceramics at Alfred University. She is one of many millennial potters who has chosen Seagrove, a small area in central North Carolina, as a home and has been influenced by 19th-century regional processes. She creates works recognizable as distinctly her own while contributing to and drawing upon the ever-evolving visual tradition in the Seagrove area.

Seagrove boasts a large concentration of active ceramicists; today, it is thought there are up to 100 potters working in the area. Some are part of families who have made pottery in the region for many generations. Others moved to the region for its clay community and the accessibility of nearby clay deposits.

Johnston’s unmistakable style is owed to her attentive processes of applying and carving layers of contrasting slips into stylized flora and Art Deco-inspired patterns on the surfaces of her ceramic pieces. Her works feature glossy ash glazes and warm brown tones complexified with salt additions to the atmosphere of a wood-burning kiln.

The effect of the kiln atmosphere is visible in this lidded vessel on the top of the lid and in the band above the looped handles where unglazed clay takes on a deep brown tone and an almost shiny metallic reflection where light strikes the surface.

Johnston creates a variety of forms, including those meant as daily service items like plates, cups, and vases, in addition to large-scale vessels and storage jars. She has become a prominent voice for young potters in the Seagrove area, especially women potters. Her voice emanates through workshops she teaches, lectures given (such as at the National Council on Education for the Ceramic Arts conference in 2019), participation in pottery fairs and exhibitions, and the opening of the Triangle Studio and gallery in Seagrove with collaborator Erin Younge.

This work will be on view in an upcoming exhibition curated by Sarah Kelly titled Muddying the Waters: Exploring Traditions in Carolina Clay.