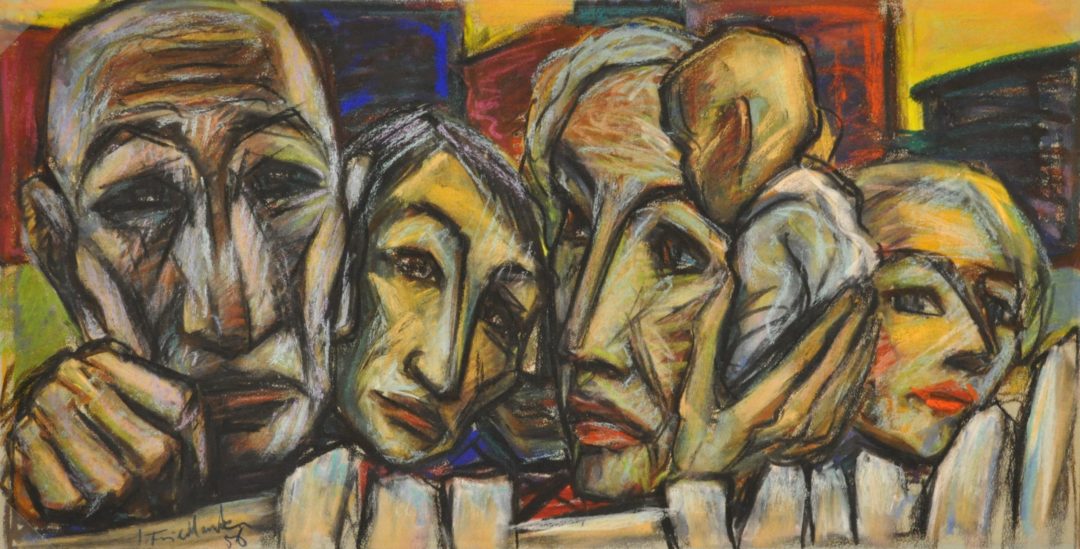 Isac Friedlander has a way of imbuing a fairly straightforward scene with emotion and mystery. In this pastel the majority of the space is filled with people’s faces, their heads crowded together, peering at the viewer over a fence. They seem to be one cohesive group, connected through a network of dark outlines, with skin, lips, and hair rendered in a variety of colors. Brightly colored buildings or houses provide a backdrop. Appearing disembodied, these heads have enigmatic expressions, and make you wonder – are they coming to the fence to welcome us or caution us away? Are we part of their neighborhood? Have we gotten too close?

Friedlander experienced harsh realities in his own life. As a teenager in Latvia (at that time part of Russia), he was arrested and sentenced to prison under the Czarist regime. He served four years in prison, often in solitary confinement. After his release his mother sold her jewelry in order to send him to Italy, where he studied at the Academy of Rome, and associated with Russian expatriates, including the writer Maxim Gorky. After the fall of the Russian czar in 1917 Friedlander returned to Latvia to teach art, where he also started a family. He was divorced in the late 1920s, and his ex-wife and daughter were later killed in the Holocaust. He came to the United States in 1929 where he became known for his woodcuts and etchings of Biblical subjects and sympathetic scenes of people hit hard by the Great Depression.