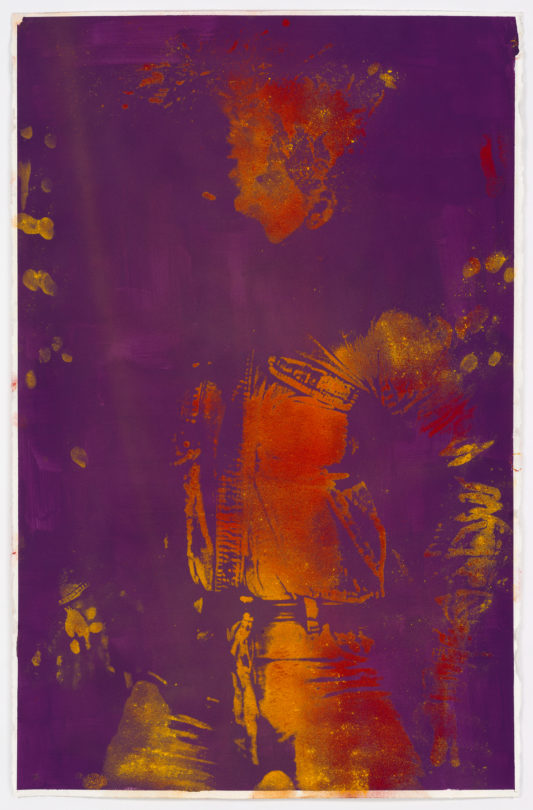 At first glance, I thought this was a painting of golden metal armor. But after examining it closer, I notice that it looked more like jeans and a dress shirt. The shape was made when the artist imprinted her own body onto the paper while wearing her studio work clothes. When I saw the title, Sister Resister, it all made sense to me. In my opinion this work represents the duality of being a woman and explores the concept of a community responding to a common cause, as implied by a sisterhood. I see her artist uniform—her day-to-day clothes—representing her as a normal person, but the intense orange and yellow speaking through the purple color makes it look like the armor that we put up in order to face women’s issues in society.

The idea to “perform” body prints came from the artist’s need to create something that was more personal than her other works. Ferris is known for her mostly large-scale canvases covered with layers of spray paint and hand-painted geometric fields, which she describes as “emotionally bombastic.” However, in this series she uses oil and powdered pigment on paper to create a literal mark, like a fingerprint. The imprinting process seems very complicated to a person with no art background, such as myself. Regardless, her concept is simple: a portrait of the artist, no props or other objects.

Another piece of evidence that this work represents an “armor” is that the body prints are part of a larger series by Ferris. They were on view in 2017 as part of an exhibition entitled M/A/R/C/H at the gallery Mitchell-Innes & Nash in New York City. She describes the collective works in the series as an army of bodies, and armies “march.” They also fight, protest, and resist power, reflecting the political issues that many communities are currently enduring.