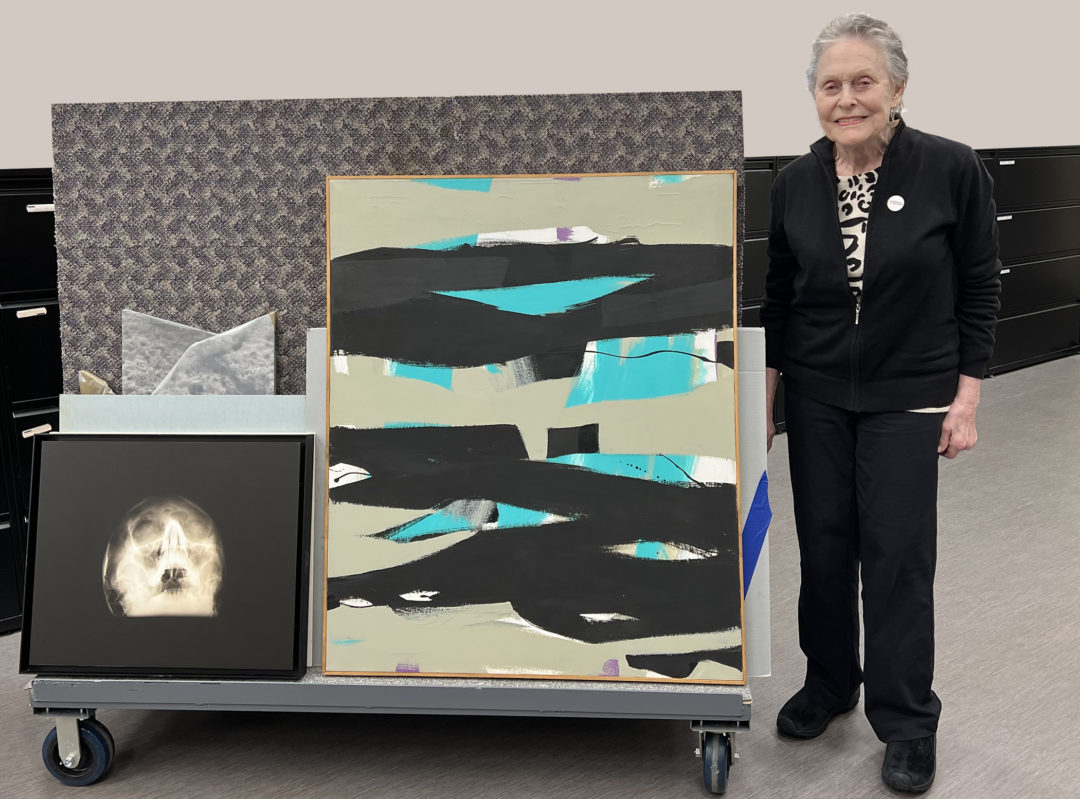 I wondered after looking closely at Jo Sandman’s painting Solstice: Did she know where those drifting black tendrils of paint would take her? Sandman (born Boston, MA 1931) is a contemporary artist whose practice involves painting, sculpture, photography, and many experimental mediums. Her work, often abstract, figurative, or a combination of both, explores fundamental allegories and visual qualities including form, light, materiality, love, and death. She enrolled at Black Mountain College for the 1951 summer session and studied with Robert Motherwell, Cy Twombly, and Robert Rauschenberg. Sandman also took courses with Hans Hofmann at his schools in New York and Massachusetts, where she continued to practice painting with Motherwell. The latter’s influence on Sandman might be most apparent in Solstice, with its sweeping strokes of black paint laid with tentative control. Wading between the powerful gestures of Abstract Expressionist artists and the looser forms of the Color Field painters, Solstice draws together various post-war American ideals of abstraction in a refreshing composition.

The balance between color and shape in Solstice is immediately striking. The black charges to the foreground but is met by an onslaught of lighter tints: white, cyan, beige, and mauve. The colors swoop and scramble between each other like younger cousins getting in rows for a family portrait (and everyone finds their place.) Despite the stacked, flattening strokes of black and beige, gravity seems to pull the center of the picture downwards. The resulting composition assumes a natural balance inherent to waterfalls and mountains—achieved only through sheer mass, erosion, and time. Sandman learned while a student of Hofmann the importance of maintaining what he called the “push and pull” between elements in a picture, and her contrasting orientations and colors carry out this lesson well.

Following the late 1960s, Sandman’s art took an experimental turn. She began making conceptual artworks that themselves documented interactions between unlike materials, such as filling radiator hoses with plaster and cutting them into uneven segments. The resulting pieces are uneven, worm-like, and each has a unique form. Much like her coral pieces carved to look like human faces, they straddle the line between organic and inorganic. This theme continues in Sandman’s more recent Light Memory series, in which she transforms x-ray photographs of her own body and anonymous individuals. The framed print to the left of Solstice is one from this series. Her subtle altering of the colors and composition of the image makes the skull appear to hover over the surface. Sandman’s art, which ceaselessly mines aesthetic potential in unexpected places, is a lesson to nurture the hidden liminalities of everyday objects and materials.