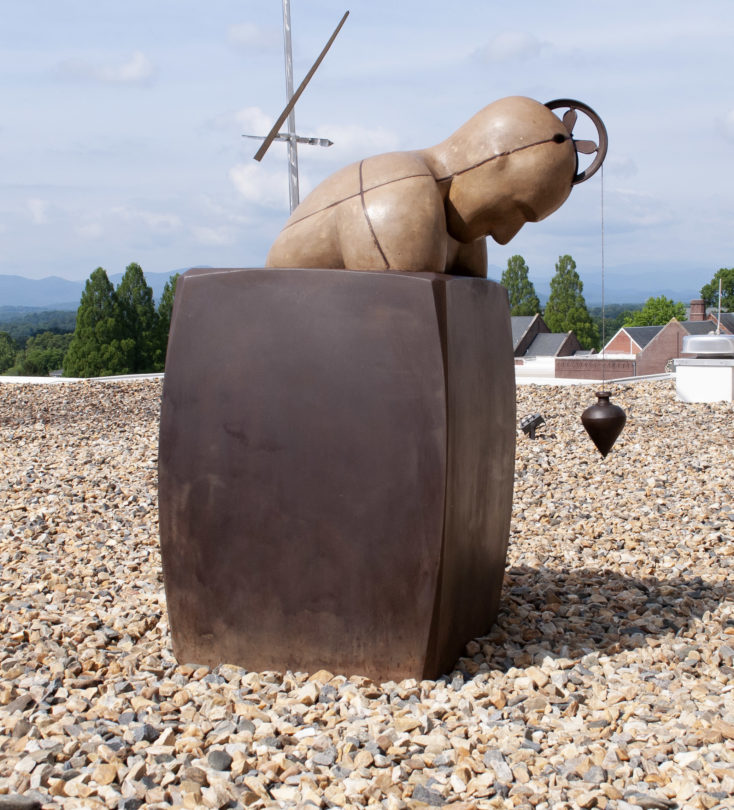 This work prefaces a move in Hoss Haley’s career toward making work concerned with purely formal elements, focusing on math and physics. During his residency at Penland School of Craft, Haley had intended to focus on figurative work, but in pursuing that goal he realized that the figure had become a crutch or justification. The figure was acting as the functionality of an object had acted in the past. Coming from a craft tradition, the functionality of an object was the justification to make it. That justification then freed the craftsman to explore formal relationships and be creative without having to explain “what is it?” or “what does it do?” Haley had spent time in this modality and was now using the figure as a justification for making non-functional objects.

True (1999) represents a decision that this justification was no longer necessary, and this was the last time Haley incorporated a figure into his work. The composition of the work alludes to the shift with the largest element being the purely geometric form of the plinth and the figure being limited to just a bust with a wheel and plumb bob hanging from its head. The plumb bob dangles directly in front of the figure’s gaze as if it is contemplating a single point and the relationship of that point to everything around it. Haley would take this fascination with him to the next work leaving the figure behind.

The installation of True on the roof of the Museum was straightforward and without issue. It takes several people to safely move and position a work like this, but Haley fabricated an easy way to mount and secure the sculpture. When artists take installation into consideration during fabrication, it makes my job much easier.

This sculpture is currently on view on the Museum’s level four sculpture terrace.

Haley grew up on a farm in Kansas, learning to weld at an early age. A three-year residency at Penland School of Craft in the late 1990s prompted his permanent move to Western North Carolina as well as a change in his process, from hot to cold working metal, frequently with tools he made himself. He favors industrial materials and fabrication methods, often building or adapting the machines and tools he uses to produce his two- and three-dimensional works from steel, concrete, and bronze. Learn more about Haley and his work at http://hosshaley.squarespace.com/about.