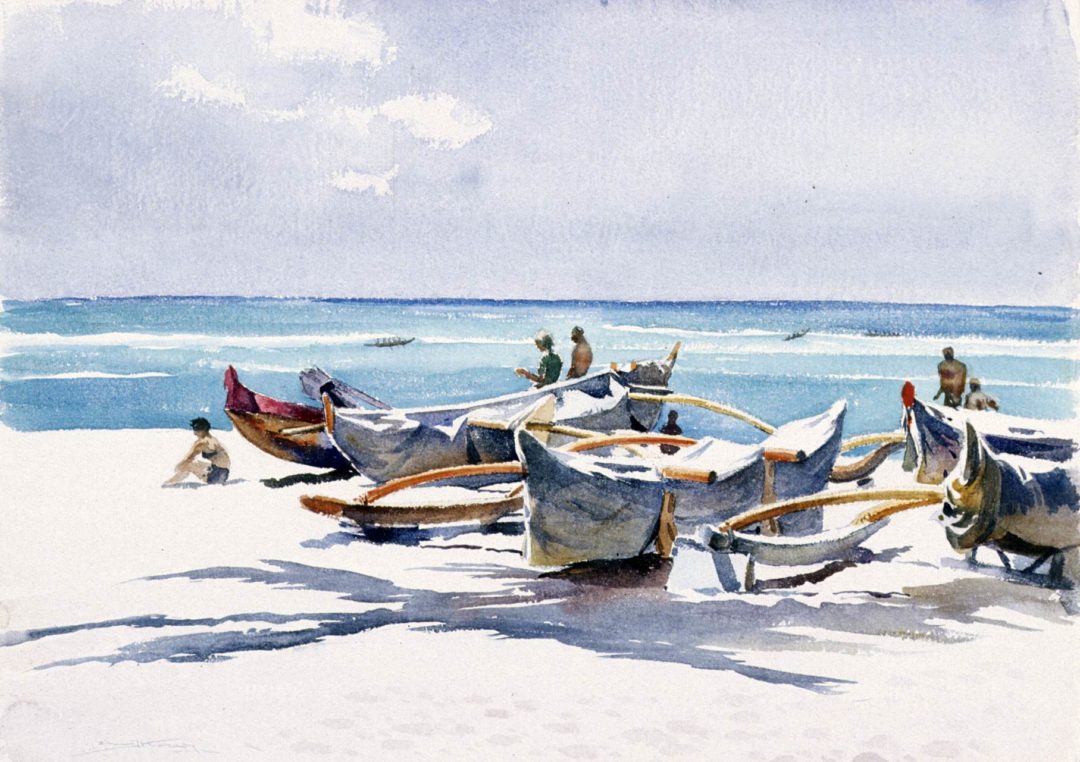 Seeing this image for the first time inspired a nostalgia that brought me back to growing up on the beaches of North Carolina. The lighting of this maritime watercolor is indicative of scorching early afternoon sun, one that creates a harsh glare off the salt-white sand of Waikiki beach. This image is captured by Emil J. Kosa Jr., one of California’s foremost 20th-century Realists known for capturing many idyllic landscapes and portraits, as well as murals. He was born in Paris in late November of 1903, and in 1968 he died in early November in Los Angeles. He is recognized by the American Watercolor Society, the California Watercolor Society, the Panama-Pacific Exposition, The National Academy of Design, and several other notable organizations in art. Kosa was a renowned Czech artist who studied at The Prague Academy and The California Art Institute, as well as a few other European art institutions.

This watercolor drawing reminds me of a Hemingway-esque romance for the ocean found in his novels such as The Old Man and The Sea; this was one of my favorites to read when I was growing up. The dry blue color of the sky is indicative of the arid heat of the tropics. Perhaps this reveals a type of mid-summer afternoon where a storm could break and be gone in a matter of moments, leaving behind only a quickly moving rainbow. The shadows that rest on the horizon, in deeper blue swells offshore, may be indicative of these approaching clouds. For the figures on the beach, the weather in this scene is nothing to be concerned about, since they can still appreciate the sunlight along the aqua and seafoam-green shoreline.

In the foreground of the composition is a cross-like shadow of a palm tree, which hovers out of frame. It covers the bows of the skiffs and points left towards a girl who observes the distant wave break. The other four figures may depict two pairs of fishermen who have hauled their boats in from a morning of fishing and continue walking while discussing the next days’ tactics. These three figure groupings are brought together by the leading lines of the five outrigger skiffs in the midground of the composition. These skiffs are traditional Hawaiian watercraft that weave together many practices within Pacific-island culture and also symbolize the Hawaiian peoples’ connection to the ocean. Distantly in the composition, as many as three of these tiny skiffs and rowers are seen paddling past the breakers on the reef.

Through the lens of Kosa, the viewer sees Waikiki beach from sometime around 1968; perhaps this image was captured in a moment of reflection during the summer before his death. This would be early in Waikiki’s rapid development of contemporary hotels that now densely line Honolulu’s southern shoreline. However, by 1968 Waikiki was a well-established hotspot for tourists and a huge following of American surfers who had just been introduced to the sport.

Kosa also worked as a special-effects artist and as the art director for Twentieth Century-Fox Studios from 1933 until 1968. Kosa is credited with creating and designing the original 20th Century Fox logo. During that time, he won an Oscar for the special effects in Cleopatra. Kosa’s cinematic eye is evident in this composition as he highlights his use of the rule of thirds (a common compositional tool used by artists), a sense of strong visual angles, and continuing lines. This is also true when considering his use of high contrast and accurate rendering of reflected light. It seems as if this scene has been plucked from the early stages of a movie’s storyboard, perhaps a movie that depicts Waikiki beach accompanied by the sounds of the ocean’s breeze, rolling waves, seagulls, and the distant harmonies of The Beach Boys.