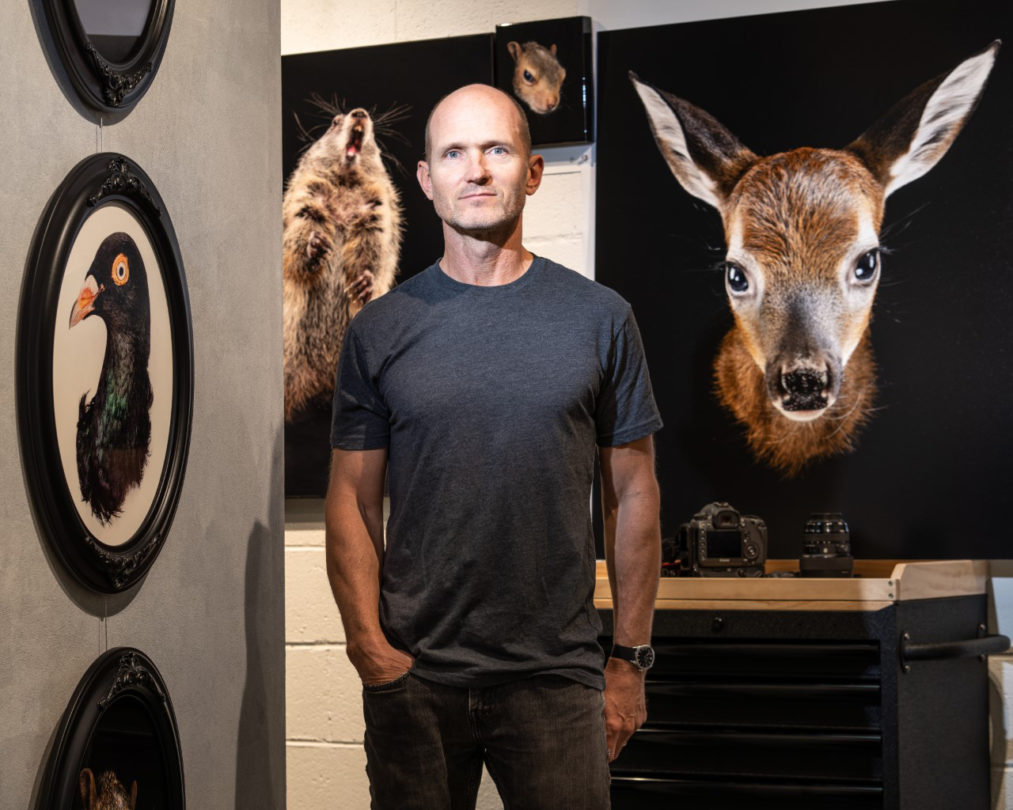 Evan Kafka grew up on the Maryland side of the DC Beltway, attending a technical school for electronics in the mid-1980s, then working for the Associated Press in Washington as an electronics technician. Trouble calls to the area’s major news outlets and institutions—TV and radio stations, newspapers, even the White House, Capitol, and deep inside the Pentagon—gave him a rare insider’s perspective, a taste of what it’s like to personally witness history. The job brought him face-to-face with many top news photographers, opening him to the idea of a career in the field. He quit his job, headed north, and studied photography at Rochester Institute of Technology. After graduating in 1995, he moved to Williamsburg and set up a darkroom. In no time, he was shooting editorial assignments for Metropolis, Entertainment Weekly, and ESPN. After many years of travel all over the country and world—for the likes of Fortune, The New York Times, New York magazine, Inc., and Barron’s and Forbes—his focus turned to advertising assignments, where his passions lie today. After 19 years in the city, he and his wife packed up the kids and headed south, to the mountains of Asheville, NC.

Evan Kafka: My love for nostalgia drew me to photography. My goal was to capture nuance and study it forever. So I began my career as a photojournalist of sorts, working out of a bag on my shoulder. But this solo line left me lonely, so eventually my shoots turned into larger, more collaborative efforts. This gratified the problem-solver in me. I thrive on tackling the sorts of obstacles that come with large studio shoots—be they creative, logistical, time-sensitive, or financial—and I enjoy working with a team to create the ultimate images. What I like most about advertising photography is the opportunity to join forces with great art directors, stylists, and assistants to create the perfect image. This group effort, pulling out all the stops, is what really excites me. I feel most at home when I’m leading productions, whether big or small.

It’s interesting that you moved here from the hustle and bustle of NYC. Has living in Asheville changed your creative practice at all?

EK: Sometimes I miss the access to so many high-end art galleries and institutions, photo equipment, and a highly experienced crew. You feel like you’re on the pulse there. But New York is suffocating too, for all of the obvious reasons: it’s expensive, it’s crowded, and you’ve to get on an elevator just to step outside. A lot of my creative community was aging out of the city and moving on to more reasonable locations. I felt isolated there, as strange as that may sound.

I really enjoy what Asheville has to offer. I have room to spread out, a great community of artists to draw from, great food, music, and culture, and the best weather on the east coast. A good week in Asheville has me mountain biking, skiing, and running. I’m having a lot more fun here. That in turn is relaxing my perspective on photography. I’m applying 20 years of commercial experience to whatever interests me as an artist. I am not beholden to anyone. That’s freeing.

How do fine art and commercial projects overlap?

EK: I treat my fine art shoots just like commercial shoots. In that sense, they are the same. They go into the same work flow, same storage system, and so on. But the commercial shoots have to be done first. I have to do my chores before I can play. Otherwise, the biggest difference is that I’ve got to make the client happy. In both cases, a lot of the work is done before and after the actual shoot. The shoot is sometimes the easy part. With some commercial shoots, there is a sense of relief once the shoot day has arrived. That has to do with making sure all of the client’s expectations are going to be met. When making art, I am the client. I have high expectations too, and I get sad when they aren’t met. But at least I’ll give myself a second chance. That doesn’t happen in the commercial realm.

Can you tell us a bit more about your Trophies series? How does this series differ from your other animal series, Wildside?

EK: With the Wildside images, my goal was to go after the personalities of the animals; to capture them being crazy and random. Sometimes they look human because they’re making relatable expressions. Or is that just our assumption? What I love about photography is it’s unique ability to extract a instant in time—light bouncing off of actual objects directly into the lens—and allow the viewer to study detail more closely than would otherwise be possible. I use black or white backdrops to remove all context. I light animals with studio strobes to make razor sharp detailed images frozen in time.

Many of these images are captured so quickly that I don’t even see what’s taken place until I’m looking through images after a shoot—the chicken turning its head 180 degrees, the horse rearing up, or the black dog opening its mouth. Luck favors the prepared. The actions happen so fast I can hardly see them, but I’ve pressed the shutter and the camera sees them and the strobes freeze the moment. I often don’t know what I’ve got or if it’s good until hours after the shoot. During the shoot, I seldom know if I’ve got anything good.

Trophies came about because of an idea I came up with to go beyond extracting the animal from their environment and extract their heads from their bodies. I started experimenting with fabric and the results were really exciting. With this technique I see the animals in new ways: they are taxidermy mounts; they are formal cameos; they are school portraits; they are on the chopping block; they are black velvet paintings; they are story book characters; but most of all, they are alive and they are real. Is it reality? Maybe not, but it’s real.

I think we’re all dying to know: is it more challenging photographing babies or live animals?

EK: It’s funny, there are a lot of similarities. It really depends on the baby, or the animal on any given day. Some of the animals are a lot smaller, or a lot quicker, which can be challenging. But not unlike celebrity or CEO photography, you have to be ready to get something really good from your subject in the first few minutes. That may be all you get. In each case, sometimes you’re pleasantly surprised and given all the time you need, but that’s rare. So the one thing I’ve learned from years of experience is that you have to spend a lot of time making sure you’re ready. I once shot Bill Gates on a medium format film camera back in 2002. I shot 10 shots on a roll. After the 10th shot and about a minute in, I reached for another film back from my assistant, which would take about 20 seconds to put onto the camera. But Mr. Gates said “I have to go,” and that was it. Luckily we were setting up for that shot for an hour and everything looked good. Animals and babies can be the same. At least with animals, it’s easier to keep them interested with food when absolutely necessary.

EK: I meet people and friends of friends. I also work with a local animal shelter. I usually trade them images for their time. Sometimes I offer my photographic services if they are of use. But I’m always looking. If anyone is interested, please contact me.

What’s it like having them in your studio? What’s the craziest experience you’ve had photographing a live animal?

EK: Often times I take my studio to the animals. I recently photographed a fawn. It was such a beautiful creature. I had a groundhog in my studio. It was active and spastic and very difficult to photograph. It’s always fun to have animals wandering around my studio. Sometimes it gets a little messy, but it’s not as messy as being in the barn. One time I was shooting cows for a commercial job, and big heifer did not like it and started literally climbing the walls. I thought she was going to knock everything down. Fortunately I’d clamped all of my lighting to the studs and rafters of the barn so I didn’t have to worry about them tipping over. It’s a bit scary with horses and cows when I’m the only thing between them and the exit. But I really don’t think about it and try to stay focused.