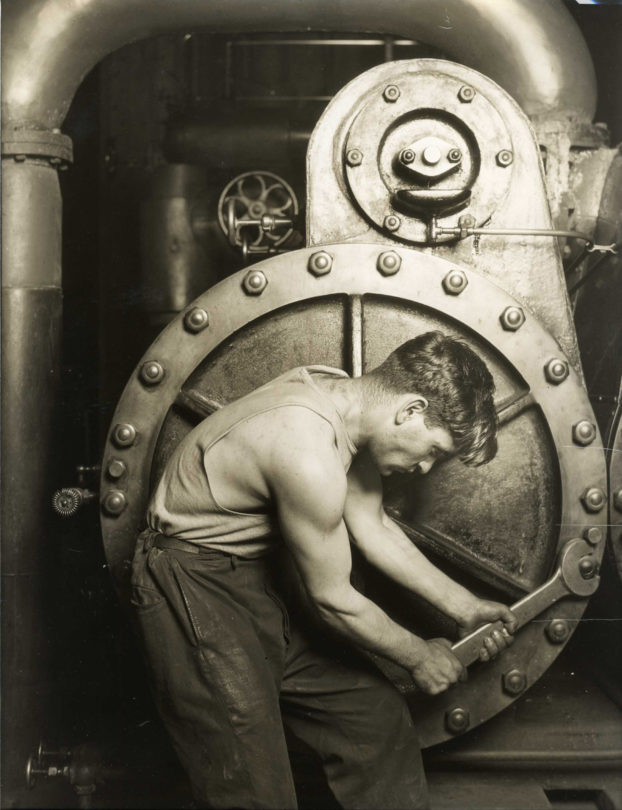 Asheville, N.C.—Our Strength Is Our People: The Humanist Photographs of Lewis Hine is a moving exhibition of 65 rare vintage or early prints surveying Lewis Hine’s life’s work documenting the travails and triumphs of immigration and labor. It culminates in his magnificent, oversized photographs of the construction of the Empire State Building in 1931. Our Strength Is Our People coincides with the complementary exhibition, Old World/New Soil: Foreign-Born American Artists from the Asheville Art Museum Collection. Both exhibitions will be on view in the Asheville Art Museum’s Appleby Foundation Exhibition Hall May 7 through August 2, 2021.

“The importance of Lewis Hine is not singular; it is his ability as a photographer combined with his insight on the human condition as a sociologist that reveals his compassion,” says Whitney Richardson, associate curator. “Our Strength Is Our People does a beautiful job expressing how these two parts of Hine’s personality united in his work to offer us, the viewers over 100 years later, a glimpse into the past and what it meant to be a worker and an immigrant at that time.”

This moving and memorable exhibition is a concise survey of the life’s work of Lewis Wickes Hine (1874–1940), the father of American documentary photography. Trained as a sociologist at the University of Chicago, NYU, and Columbia University, Hine became a high school teacher at New York’s Ethical Culture School, a bastion of progressive education. At the time, the roiling political issue was immigration—much as it is today. Conservatives viewed immigration as a source of crime, disease, and the loss of America’s essential Anglo-Saxon character, whereas Progressives saw America as a melting pot, a beacon of light for foreigners escaping poverty and tyranny. Armed with an awkward large-format view camera and magnesium flash, Hine took his students to Ellis Island in 1905 and put a human face on the “huddled masses yearning to breathe free.”

Hine’s empathetic interest in the immigrant experience did not end at Ellis Island. In 1907 he joined the Pittsburgh Survey, a comprehensive socioeconomic analysis of a typical industrial city in America’s heartland. As seen through Hine’s lens, the steel that supplied the backbone of America’s industry was being forged by immigrants—the Italian and the Irish, the Serb and the Slovak, now proud Americans. Hine’s focus on the dignity of the American worker would last a quarter century, culminating in his magnificent photographs of the construction of the Empire State Building in 1931 and in the classic book Men at Work. His oeuvre is the humanist counterpoint to the avant-garde art world’s fixation on the machine as the emblem of the modern age. To Hine, however, labor was a double-edged sword. In the service of unchecked laissez-faire capitalism, it could be physically and emotionally debilitating, dehumanizing rather than empowering—never more so than when minor children are deprived of their childhoods and put to work in the factories and the field. Starting in 1908, Hine worked for the National Child Labor Committee (NCLC), sneaking his camera into cotton mills, canning companies, and glassworks to document the exploitation of children, always under false pretenses and often at great personal risk. Hine’s heart-rending images of underage labor were the principal tool used by the NCLC to lobby state-by-state for child labor laws, until Congress finally outlawed the practice at the national level in 1938.

That year, Hine applied for a Guggenheim fellowship. His proposed project was entitled “Our Strength Is Our People,” from which the exhibition title is borrowed. His proposal stated: “This project should give us light on the kinds of strength we have to build upon as a nation. Much emphasis is being put upon the dangers inherent in our alien groups, our unassimilated or even partly Americanized citizens—criticism based upon insufficient knowledge. A corrective for this would be better facilities for seeing, and so understanding, what the facts are.” Inexplicably, the Guggenheim Foundation turned him down. Two years later, Hine—the epitome of the “concerned photographer”—died penniless and on welfare, his beloved wife Sara dead of pneumonia, and his house lost to foreclosure. But today, 75 years after his death, Hine’s photographic achievement lives on; an unblinking composite portrait of America the melting pot, a country beset by grave injustices, yet always a beacon of hope.

Our Strength Is Our People coincides with the complementary exhibition, Old World/New Soil: Foreign-Born American Artists from the Asheville Art Museum Collection. Inspired by the book Immigrant Gifts to American Life: Some Experiments in Appreciation of the Contributions of Our Foreign-Born Citizens to American Culture written in 1932 by Allen H. Eaton, a contemporary of Lewis Hine, the exhibition Old World/New Soil calls attention to the collection of works the Museum has acquired from artists who came to the United States either at their own prompting or out of necessity. Just as they adopted America as their new home, we have in turn embraced them, their creative output, and their artwork.

Our Strength Is Our People is organized by art2art Circulating Exhibitions, LLC. All works are from the private collection of Michael Mattis & Judith Hochberg. This exhibition is generously supported by the Workers’ Legacy Foundation.

Our Strength Is Our People