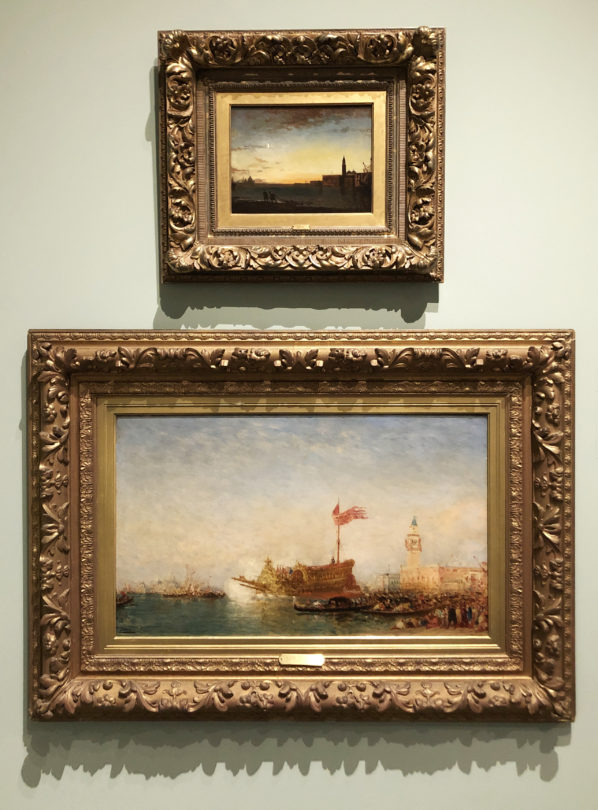 I promise I’m not exaggerating when I declare that Venice is my favorite city in the world. So naturally and unsurprisingly to those who know me, I was instantly drawn to Felix Ziem’s wall in the Museum’s exhibition Across the Atlantic: American Impressionism Through the French Lens. If you visit this space you’ll see depictions of Venice (what I believe is the most magical and mysterious city in the world) by Ziem hanging together. I briefly called Venice home as I lived and studied on the Grand Canal—next to the Peggy Guggenheim Collection—during the second half of my junior year at Wake Forest University. It’s for this reason and my undergraduate degree in Art History that I can say I’ve seen my fair share of Venice paintings over years, and I hold Ziem’s portrayals of the city in high regard. Ziem’s two paintings combine two of my greatest loves—Venice and a style of painting that is considered a precursor to French Impressionism.

Ziem was a French painter in the style of the Barbizon school and is particularly known for his light-filled depictions of Venice canals. It’s said that Venice was Ziem’s favorite subject, and I enjoy how much we share a love of this city. Ziem has a captivating way of capturing the light—almost as if it’s flickering. Your eye is immediately drawn to the blue, pink, and yellow hues of the skyline. As I studied the paintings, I found myself slowly sinking into a dreamlike state of mind, lost in the many details of his loose and energetic brushstrokes. Ziem employs such techniques that were widely used by Impressionist masters. The painting on top appears to be at twilight, hence the title. On the left, I love that I can spot the outline of my favorite church—Basilica di Santa Maria della Salute—located in the Dorsoduro neighborhood, about a two-minute walk from where I lived. I’d often take an evening walk to sit on the steps and watch the sunset, just like the one in this painting. The bottom painting, which is quite a bit larger, depicts a vibrant daytime scene of the hustle and bustle at Piazza San Marco (St. Mark’s Square) on the day of the Marriage of the Adriatic ceremony, held in honor of Venice’s maritime dominance. In both works, you can see the Clocktower on the north side of the Piazza San Marco, an icon of Venitian architecture.

I visit these paintings in the exhibition space often, as I love the deep sense of nostalgia and memories they evoke from within me. Especially during a time when international travel is temporarily on hold, Across the Atlantic is the perfect location for some safe travel without having to leave home.

Across the Atlantic: American Impressionism Through the French Lens is now on view through April 19, 2021. Visit the exhibition page to learn more and reserve tickets now. Across the Atlantic is organized by the Reading Public Museum, Reading, PA. Generous support for this project provided by Art Bridges, The Maurer Family Foundation, and Bitsy & Jim Powell.