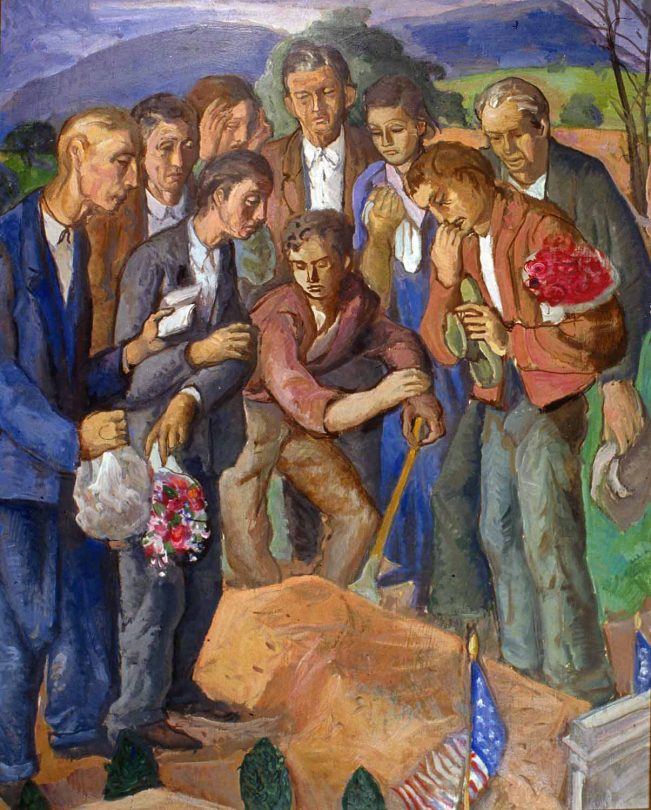 Pierre Daura, Funeral,  circa 1941–1945, oil on canvasboard, 32 × 25 3/4 inches. Gift of Martha R. Daura, 1998.17.35.21. © Estate of Pierre Daura.
Inspired by the book Immigrant Gifts to American Life: Some Experiments in Appreciation of the Contributions of Our Foreign-Born Citizens to American Culture written in 1932 by Allen H. Eaton, a contemporary of Lewis Hine, the exhibition Old World/New Soil calls attention to the collection of works the Museum has acquired from artists who came to the United States either at their own prompting or out of necessity. Just as they adopted America as their new home, we have in turn embraced them, their creative output, and their artwork.

Our Strength Is Our People surveys the life’s work of Lewis Wickes Hine (1874–1940), the father of American documentary photography. Consisting entirely of 65 rare vintage prints, it covers the three overarching themes of Hine’s three-decade career—the immigrant experience, child labor, and the American worker—and culminates in his magnificent studies of the construction of the Empire State Building.